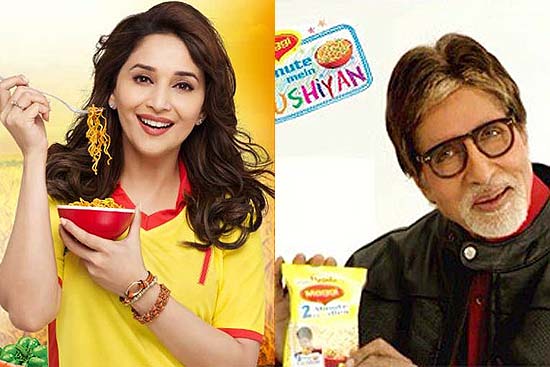 A Bihar court today ordered registration of an FIR against Bollywood stars Amitabh Bachchan, Madhuri Dixit and Preity Zinta, who have featured in the Maggi advertisements, and said they could be arrested, if required.

Additional Chief Judicial Magistrate, Muzaffarpur, Ramchandra Prasad directed Kazi Mohammadpur Police Station to register FIR against the three actors, besides two top officials of Nestle India and investigate the complaint by a lawyer, who claimed he was taken ill after eating the 'two-minute' noodle.

Advocate Sudhir Kumar Ojha had filed a complaint againt the five yesterday and the court passed the order after a hearing.

Apart from the actors, the petitioner had sought action against Managing Director of Nestle India Mohan Gupta and its Joint Director Sabab Alam.

The complainant has claimed he bought Maggi noodles from a shop at Lenin chowk in Muzaffarpur on May 30 and was taken ill after eating it. This, he said, prompted him to file a case against Nestle, the makers of Maggi, and the film stars who have promoted the product as brand ambassadors.

The case has been filed under IPC sections 270 (malignant act likely to spread infection of disease dangerous to life), 273 (sale of noxious food or drink), 276 (sale of drug as a different drug or preparation) and 420 (cheating and dishonesty).

The three actors are already facing a similar case in a Barabanki court in Uttar Pradesh.

While Bachchan said he no more endorses the brand, Dixit recently met Nestle officials in this regard and said the company has assured her about the quality of the product.

Amid the raging row over Maggi, Consumer Affairs Additional Secretary G Gurucharan had yesterday said the actors would be liable to action if the advertisements are found to be misleading.

"It becomes a misleading advertisement if it is found that the product does not have the attributes that the manufacturer professed. And if the brand ambassador has promoted that product and said specifically that the product has those attributes, they are also certainly liable for action," Gurucharan said.