Madonna Defends Her 'Blow White House' Remark, Says It Was A Metaphor 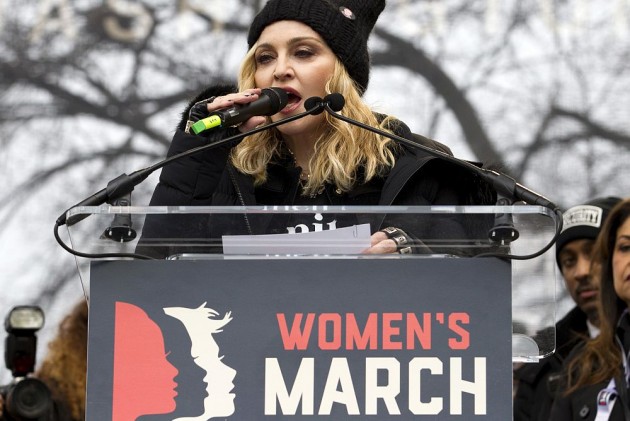 Print
A
A
A
increase text size
Outlook January 23, 2017 15:45 IST Madonna Defends Her 'Blow White House' Remark, Says It Was A Metaphor

Queen of Pop Madonna was among the many high-profile celebrities who delivered speeches at the Women's March in Washington DC, but her profanity-ridden, confrontational speech raised a few eyebrows.

After stating that she's "thought an awful lot about blowing up the White House" and dropping three f-bombs, the 58-year-old singer took to Instagram to clear up any confusion, reported People magazine.

"Yesterday's Rally. Was an amazing and beautiful experience. I came and performed Express Yourself and thats exactly what I did. However I want to clarify some very important things," she captioned a photo of herself with the words "I choose love!"

Madonna explained that she does not encourage violence and felt that parts of her speech were taken "wildly out of context."

"My speech began with 'I want to start a revolution of love.' I then go on to take this opportunity to encourage women and all marginalized people to not fall into despair but rather to come together and use it as a starting point for unity and to create positive change in the world," she wrote.

"I spoke in metaphor and I shared two ways of looking at things — one was to be hopeful, and one was to feel anger and outrage, which I have personally felt. However, I know that acting out of anger doesn't solve anything. And the only way to change things for the better is to do it with love."

Madonna concluded the post by saying, "It was truly an honor to be part of an audience chanting 'we choose love.'"

Addressing the members of the march, Madonna was clear on her feelings that this moment is "the beginning of a much-needed change."

She followed up the statement with a comparison between violence and peaceful protest. "Yes, I'm angry. Yes, I am outraged. Yes, I have thought an awful lot about blowing up the White House, but I know this won't change anything. We cannot fall into despair. As the poet WH Auden wrote on the eve of World War II: 'We must love one another or die. I choose love'."

America Ferrera, Ashley Judd and Scarlett Johansson, among others, also delivered speeches to the hundreds of thousands of marchers at the nation's capital on Saturday.

An estimated 3 million people took part in marches around he world.