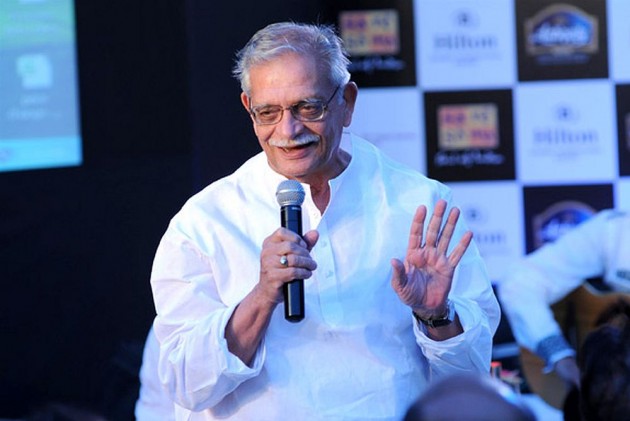 Print
A
A
A
increase text size
Outlook January 19, 2017 13:42 IST Lyricist Gulzar's Poetry Sets The Ball Rolling For The 10th Edition Of JLF

Veteran lyricist Gulzar's spellbinding poetry suffused the air and left a packed house entranced as the curtains went up today on the 10th edition of the Jaipur Literature Festival (JLF) at the iconic Diggi Palace here.

The five-day event that has been themed on "The Freedom to Dream: India at 70", was inaugurated by Chief Minister Vasundhara Raje, with Gulzar, American poet Anne Waldman, and spiritual writer Sadhguru in attendance.

"JLF's popularity has spread like wildfire and has resulted in the birth of other copycat festivals, which is also a good thing," Raje said.

The Minister also listed out schemes for digitisation, water conversation, and health insurance, education for girl child among others by her government.

Gulzar, who has penned same of the most iconic songs for Bollywood, addressed aspiring writers in the crowd, asking them to question themselves and find out how their writing will impact the masses and the society.

"It is important to question why one is writing. One must question oneself sternly if one is writing for satisfaction or fooling himself or the society. The collective conscience of the society cannot be fooled," he said.

While he praised the festival organisers for their "tireless" work, and said the literary extravaganza has a "big contribution" in inspiring young writers "and keeping us young", he also urged them to focus on one Indian language every year.

The poet, who is a regular and a big draw at the festival, will be participating in a session on Urdu this year.

Waldman, a cultural and political activist, gave a shout out to the participants of the Women's March on Washington against Donald Trump, calling the inaugural event for the new American President as "terrible".

"These are dystopian times. We are facing a war on the imagination," she warned.

She asserted that artistes must use their qualities to "wake the world".

"Can there be beauty amid atrocity? I think there is a resounding response in the affirmative. We can no longer have the leisure to question. The purpose of art is to help wake the world," she said invoking the legendary beat generation poet Alan Ginsberg.

What was simply a close-knit literary gathering in its inaugural edition in 2007, has metamorphosed to a gigantic carnival with a staggering 3.3 lakh people visiting last year.  The organisers said they are expecting last year's

footfall to be surpassed this year, with the literary jamboree scheduled to see over 250 authors, thinkers, politicians and popular culture icons engaging in stimulating discussions and sessions.

"16 people turned up for the first gathering at a literary reading. This year the registration is double of last year and the festival is growing," Scottish historian William Dalrymple, who has co-directed the festival with writer Namita Gokhale, said.

The event that opened today with a rousing rendition of Queen's "Barcelona" by the Shillong Chamber Choir, will feature literary heavyweights including Booker winning authors such as 2016 winner Paul Beatty, Richard Flanagan (2014) and Alan Hollinghurst, who won the coveted prize in 2004 and Lebanese-American writer and statistician Nassim Nicolas Taleb among others, over the next five days.

Touted as the world's largest free literary festival, the tenth edition will feature a range of themes including British Colonialism, poetry from Kashmir and the Caribbean, Sanskrit, Capitalism, the origins of the crisis in the Middle East, film and art among others.

With around 30 languages represented from India and across the world, the event will also feature authors writing in Indian regional languages like Kannada, Gujarati, Rajasthani, Nepali, Assamese, Urdu etc.

The festival will come to a close on January 23.

Continue FREE with Ads Pay Rs. 1 to Read Without Ads
READ MORE IN:
Gulzar Arts & Entertainment
Next Story : Up to 30 Feared Dead in Avalanche-Hit Hotel After Italy Quake
Download the Outlook ​Magazines App. Six magazines, wherever you go! Play Store and App Store