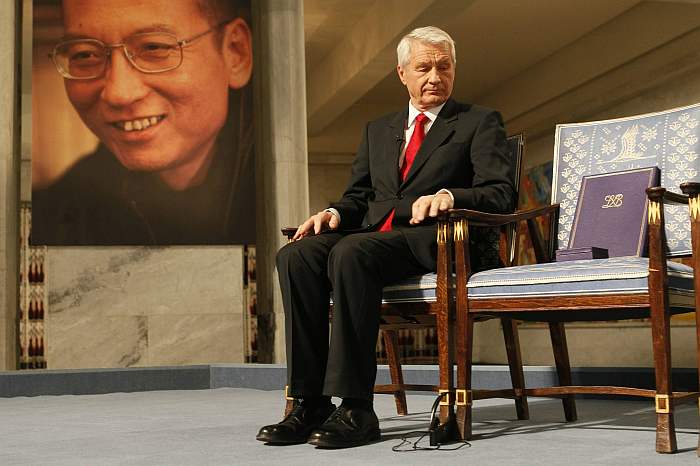 outlookindia.com
-0001-11-30T00:00:00+0553
With a large portrait of a smiling Liu Xiaobo hanging front and centre, the chairman of the Norwegian Nobel Committee crossed the dais and gently placed the peace prize diploma and medal on an empty chair.

Ambassadors, royalty and other dignitaries rose in a standing ovation.

The man they honoured wasn't there — he is serving an 11-year sentence at Jinzhou Prison in northeastern China for urging sweeping changes to Beijing's one-party communist political system.

And there was no news coverage of it in China, where foreign TV news channels went black as the ceremony began and authorities denounced the award as a "political farce."

It was the first time in 74 years the prestigious USD 1.4 million Nobel Peace Prize was not handed over.

Committee chairman Thorbjoern Jagland drew the first of several standing ovations from the international gathering of 1,000 guests at Oslo City Hall when he noted that neither Liu nor his closest relatives were able to attend.

"This fact alone shows that the award was necessary and appropriate," he said.

He brought the crowd to its feet again when he declared: "He has not done anything wrong. He must be released."

China was infuriated when the Nobel committee awarded the prize to the 54-year-old literary critic, describing it as an attack on its political and legal system. Authorities have placed Liu's supporters, including his wife, Liu Xia, under house arrest to prevent anyone from picking up his prize.

After Jagland drew another standing ovation by placing the medal and diploma on Liu's empty chair, Norwegian actress Liv Ullman read the dissident's statement, "I Have No Enemies," which he delivered in a Chinese court in 2009 before he was sentenced.

In the speech, Liu portrays the surprisingly positive and gentle nature of his correctional officer while awaiting trial, which gave him hope for the future.

That "personal experience" caused him to "firmly believe that China's political progress will not stop," Ullman read. "I, filled with optimism, look forward to the advent of a future free China," she quoted Liu as saying.

But ordinary viewers in China saw none of it. Both CNN and BBC TV went black at 8 pm local time for nearly an hour, exactly when the Oslo ceremony began. Security outside Liu's Beijing apartment was heavy and several dozen journalists were herded by police to a cordoned-off area.