Let the Next Concert Be Free and For All Kashmiris: Zubin 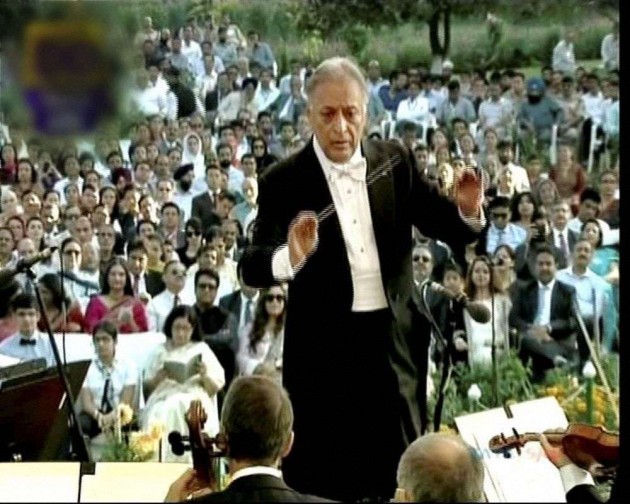 Print
A
A
A
increase text size
Outlook September 07, 2013 12:47 IST Let the Next Concert Be Free and For All Kashmiris: Zubin

Soulful strains of some of the most popular and best known western classical music compositions reverberated in the majestic backdrop of Zabarwan Hills when Zubin Mehta, world famous conductor, performed before a mesmerised audience in the Shalimar Gardens on the banks of Dal Lake here this evening.

In a unique setting in the 400-year-old Mughal Garden with its magnificent chinars, some as old as 300 years and more, Mehta and his Bavarian State Orchestra played its full cast of works of Ludwig Van Beethoven, Franz Joseph Haydn and Pyotr Ilyich Tchaikovsky in front of an invited audience of 1,500 guests.

The concert kicked off with the maestro leading the orchestra in concert with Abhay Sopori's troupe with traditional Kashmiri instruments.

The concert, 'Ehsaas-e-Kashmir' (Feeling/Experience of Kashmir), assumed political overtones following opposition by separatists and civil society, which saw it as an attempt to present a picture of peace in Kashmir which had witnessed so much bloodshed in recent decades.

The city remained mostly shut at the call of hardline separatist leader Syed Ali Shah Geelani against the concert.

'I waited and dreamt of this moment all my life'

Setting the tone for the concert, the 77-year-old music maestro started by saying in Hindi, 'Hum bahut khush hain, bahut khush hain' (I am very happy)...And the wonderful soloists who will perform for you this evening, they are those whom we have heard inadvertently".

Mehta said it was something "I have waited and dreamt of this moment...Practically all my life. And, every person on this subcontinent will agree with that this is where it (concert) should be...

"The moment the music starts, a very positive wave goes across this stage to all of Kashmir, to all our friends, to all our critics, and god bless them all, thank you," he said in his address at the concert.

Jammu and Kashmir Chief Minister Omar Abdullah started by quoting the famous couplet by Amir Khusrau "that if there is heaven on earth, it is here, it is here. Shalimar Bagh once again comes alive with the sound of music.

"Would I do it again, if I am given a chance, yes I will do it....We hope that the music from here will lift our spirits and lighten our souls for a better tomorrow," Omar said.

German Ambassador in India Michael Steiner, who hosted the concert, said, "The distance between Munich and Srinagar is 7,756-km. Today, the distance reduces to zero. German and European cultural heritage bow to Kashmir, to its history, to its beauty and to its difficult reality and journey."

"The world is looking at you, Ehsaas-e-Kashmir," he said, going on to quote Kashmiri poet Habba Khatun and German poet, Rainer Maria Rilke.

While acknowledging the support of the state government and the Chief Minister, Steiner said, "I thank you all, but most of all I thank you all Kashmiris".

Holding of the concert fulfils a long-cherished wish of the Mumbai-born Mehta, who brushed aside the controversies surrounding it, saying that he was extremely happy to be performing here. "I did not choose Kashmir, Kashmir chose me."

Among the audience were Jammu and Kashmir Governor N N Vohra, Union Minister Farooq Abdullah, a number of celebrities and envoys of several countries.

The high-profile event was telecast live by public broadcaster by Doordarshan for the first time in Hi-Definition format, which was watched by millions across India and 50 European countries.

Mehta played Symphony No.5, a composition of the famous German composer Beethoven, a crucial figure in the transition between the Classical and Romantic eras in western art music in the early 19th century.

The other well-known compositions that were played this evening were Concerto for Trumpet by Haydn, the late 18th century Austrian composer regarded by many as "Father of the Symphony", and the Violin Concerto by Russian composer Tchaikovsky, one of the most celebrated musicians of the 19th century.

Mehta, who had worked with several international orchestras including the New York Philharmonic and Israel Philharmonic, wove a magic spell and kept his audience in thrall unmindful of the controversy generated by separatists and others objecting to the concert.

The 'Ehsaas-e-Kashmir' conceived by Steiner was objected to by the separatist Hurriyat Conference and sections of the civil society, saying it was an attempt to change the status of Kashmir as a disputed land.

The civil society held a parallel concert, 'Haqeeqat-e-Kashmir' (Reality of Kashmir) at the Municipal Park, not far away from the Shalimar Garden, created by Mughal emperor Jehangir in 1619 for his wife Noorjehan.

Mirwaiz Umer Farooq, chairman of the moderate faction of the Hurriyat Conference, said earlier, "We have nothing against Mehta or any visiting dignitary... No one is against the event itself but it has assumed political overtures as an attempt is being made that everything is normal and peaceful in Kashmir, which is not the case".