Leaders for Re-Look into Anti-Terror Law 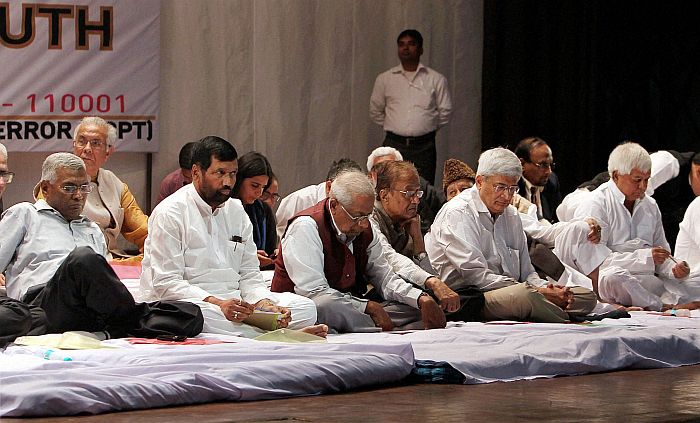 Print
A
A
A
increase text size
Outlook November 04, 2012 19:20 IST Leaders for Re-Look into Anti-Terror Law

outlookindia.com
-0001-11-30T00:00:00+0553
Leaders cutting across party lines today cautioned against selectively targeting Muslim youths in terror-related cases, saying isolation would do no good and urged a re-look into provisions of the anti-terror law.

They spoke for the need to put a mechanism and procedures to stop such "selective" isolation.

Noting that "fabricated cases, reports of torture in custody and illegal detention are challenges to democracy", Karat said the existing Unlawful Activities Prevention Act (UAPA) has many provisions from the repealed law -- Prevention of Terrorism Act (POTA).

"After 2008 attacks in Mumbai, UAPA was enacted. In it some of (repealed) POTA's provisions were incorporated. We need to look at that," he said.

Habibullah said there was need to expedite cases in which many individuals were in jails without much evidence of terror activities against them.

"It is very shameful that a section of the people don't have the confidence in the system. We need reforms urgently in political class and in police," he said.

Similar sentiments were expressed by Congress leader Mani Shankar Aiyar who assured the gathering that he would take the concerns to the Prime Minister and the Home Minister.

"Injustices need to be stopped, if not stopped then terror will never stop. It is the responsibility of the government to rehabilitate and compensate victims.

"It is the responsibility of the govt to stop this politics of terror. If we can't do this we have no right to sit in the government," Aiyar said.

Prasad said there was lack of opportunities for Muslim youth which was forcing them to seek livelihood in foreign land.

"We have to check whether the police are doing their duty by their own will or the control tower of the police is at top," he said.

Mohammad Adeeb, Head of the People's Campaign against Politics of Terror, said there was a "sense of fear which is not just hampering the Muslim youth but also the growth story of India."

He asked political parties to stop politicising religion and demanded "proper rehabilitation of Muslims who are falsely arrested".