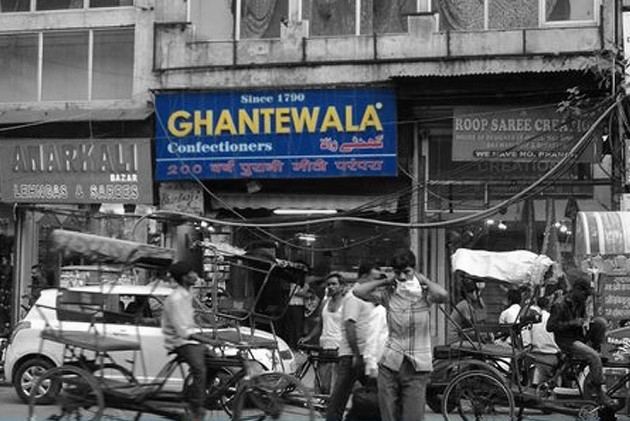 Ghantewala, an over 200-year-old sweet shop in Old Delhi's bustling Chandni Chowk market has finally downed its shutters, evoking shock and a sense of loss among food connosseirs, sweet lovers and other visitors.

In the bylanes of the bazaar, it was routine to see hungry customers dodging rickshaws and fellow passersbys to make a beeline to the shop, famed for its mouthwatering 'Sohan halwa' and 'Karachi halwa', which "tasted like pure ghee."

According to Anubhav Sapra, of 'Delhi Food Walks, the Ghantewalan (Sohan Halwa Shop) shop was among three oldest sweet shops in the Walled City the other two being Chaina Ram (9101) near the Fatehpuri mosque and Kanwarji (established in 1850) in the Paranthewali gali.

"The Ghantewala was a landmark in Old Delhi and there are about four stories associated with it that I narrate during my food walks. Some say the shop took its name after a clock tower nearby," says Sapra.

According to another story , the shop was so named by Mughal Emperor Shah Alam II himself who tasked his servants to fetch sweets from the 'Ganta neecha' (Below the bell) shop.

"In those days the area was sparsely populated and the Emperor who used to live in the Red Fort could hear the toll of the bell for the school that was located in front of the shop and was reminded to instruct his servants to fetch him fresh sweets from the shop," Nirmala Jain, a seventh generation family member told PTI in a previous interview.

Founded in 1790 by Lala Sukh Lal Jain who had arrived in the walled city from Rajasthan, the shop was being run by his great grandchildren. The Lala had begun by selling 'Mishri Mawa,' a Rajasthani speciality.

"We used to produce around 40 to 50 different varieties of sweets that we kept changing according to the season or festivals," Nirmala had said.

Owner Sushant Jain cites low business for downing the shutters, for the last time on Wednesday.

"There is a long list of reasons behind closing down of the shop and low profits is one of them. Business requires a lot of efforts and time. It is a cumbersome task to run a business and needs much attention," says Jain.

Anecdotal stories revolving around the shop include one of a rich trader who regularly used to stop by riding an elephant who would be fed sweets by the shopkeeper. The elephant had around its neck a bell which was rung to announce its arrival.

The 'Sohan halwa' a ghee dripping gram flour biscuit of Persian origin was a trademark delicacy of Ghantewala shop.

According to R V Smith, an author and chronicler of Delhi for the last 50 years, sweets for important personages like former Prime Ministers Indira Gandhi and Rajiv Gandhi were purchased from the Ghantewala shop.

"The shop was a landmark and every rickshawalla was aware of it. I used to go often to buy sweets especially its famed 'halwa sohn' and the shop was known for its high quality namkeen. Many leaders in the Congress used to buy sweets from here to be taken to Pandit Nehru's and Indira Gandhi's house.

"Old Dilliwallahs will be disappointed with the shop's closure. The lines outside the shop especially during festivals like Diwali, Durga Puja, Eid, etc was huge. It also attracted a lot of foreigners," says Smith.

According to food explorer Sapra, historic eateries in other places also face a similar fate.

"Look at what happened to the Parsi Irani cafes in Mumbai. they used to number in the hundreds but now there are only a handful, others have all shut shop.

"Nowadays, youngsters are more inclined to party and are calorie conscious and prefer to go to swanky air-conditioned outlets. They haven't tasted the food from such historic shops and so do not know what they are missing out on," says Sapra.

Many attribute the entry of other eateries and also the failure of the owner to open branches besides lack of advertising leading to the closure of Ghantewala.

"This shop had not been wooing its customers, had the owner opened a shop in New Delhi like Karim's had done, it would have done flourishing business," says Smith.

Agrees Anubhav who points out that another old shop in the bazaar 'Shyam Sweets', which serves the famed 'baltawala', a Turkish sweet, had put out advertisements and hence drew visitors.

However, shop owner Jain says the shop has not been sold but merely the business has been closed.

"No the shop hasn't been sold. It is still with me and just the business has been shut down. The place has been rented out to Raj Fashions" says Jain.

Inder Raj who owns Raj Fashions says "Everybody used to eat at Ghantewala, even we ate there and loved their sweets," says Inder Raj, owner of Raj Fashions.

Ashok Arora, owner of Anarkali Bazaar, a shop adjacent to the Ghantewala says "The shop had very low sales since the last 10 to 15 years. There are several reasons besides the low sales like the dispute between brothers that made them divide the two shops."

Recalling the lost days Arora says "The shop used to run so well that the owner used to drive a red Chevrolet at a time when only a very few could afford the Ambassador car. We have seen celebrities and important personalities from Rajiv Gandhi to painter M F Husain who used to visit the shop and gorge on its sweets."