Lalu Hits Out at Ramkripal Yadav at Patliputra Rally 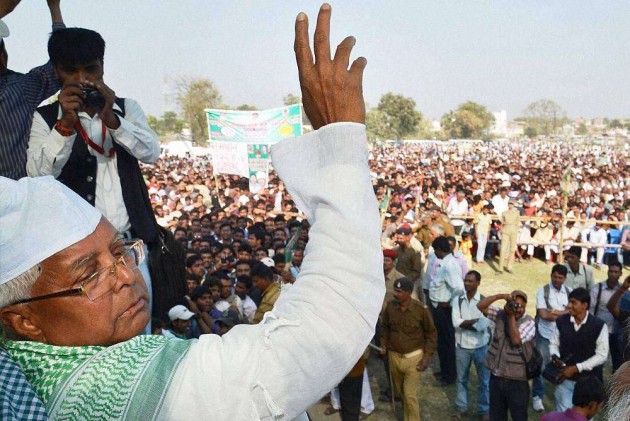 Print
A
A
A
increase text size
Outlook March 20, 2014 15:15 IST Lalu Hits Out at Ramkripal Yadav at Patliputra Rally

The rally was followed by a road show in near by Bihta.

"He has taken refuge with the communal forces, forgetting everything. He has compromised with the philosophy of social justice and joined those whom he always opposed. The public is not going to forgive him," said Prasad.

This was first visit of the RJD chief to Patliputra constituency in rural Patna after declaration of candidatures of Misa Bharti, his friend-turned-foe Ramkripal Yadav (BJP) and sitting MP Ranjan Yadav (JD-U) for the seat.

"He showed disrespect by not meeting me when I went to his residence in New Delhi to give up my seat for him. I hope the people of Pataliputra will give him a befitting reply for this," she said addressing the meeting with her father Lalu Prasad on the dais.

The public meeting saw Prasad taking recourse to his oft quoted 'secularism versus communal forces' speech. He pointed out that the BJP has joined hands with parties like Shiv Sena and Maharashtra Navanirman Sena (MNS), which have allegedly victimized the people of Bihar working in Mumbai.

Pataliputra poll battle is being considered as the biggest battle by Prasad on his comeback trail, besides Chhapra, from where his wife and former Chief Minister Rabri Devi is contesting against Rajiv Pratap Rudy of the BJP.

Pataliputra which will go to poll on April 17 is seen as the 'battle of honour' for Prasad. He had contested the seat in 2009 and lost to Ranjan Yadav.

The RJD chief, who has been debarred from contesting elections following conviction in a fodder scam case, has said he would spend last days of polling in Patliputra and Chhapra constituencies.