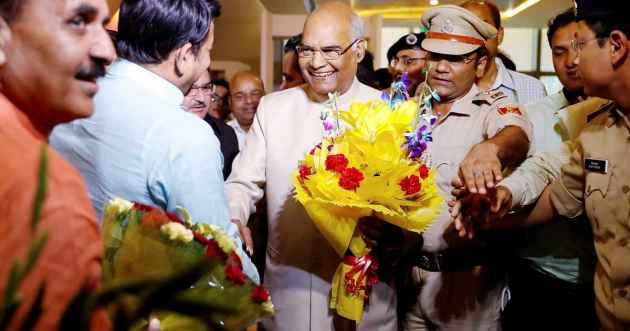 Ram Nath Kovind will be the first BJP leader to occupy the hallowed precincts of the Rashtrapati Bhawan, underscoring the saffron party's preeminent political position under Prime Minister Narendra Modi and its chief Amit Shah.

Shah acknowledged as much in a tweet saying, "It is our great privilege that 1st time BJP had an opportunity to nominate a President on its own, a member of Dalit community was chosen."

The only other BJP-led NDA presidential nominee to get elected to the top constitutional position was A P J Abdul Kalam, who won in 2002, but he had no political background.

Such was the appeal of his apolitical personality that even the opposition parties like the Congress supported his bid.

As the saffron party did not enjoy in 2002 the kind of numbers it has now, it was virtually forced to go for a face like Kalam who could draw bi-partisan support.

In the 2007 election, the BJP backed its stalwart Bhairon Singh Shekhawat, who was then the vice president, against the UPA nominee Pratibha Patil, but he lost in an one-sided contest.

In 2012, the BJP supported the candidature of P A Sangma, a former Lok Sabha speaker, against Pranab Mukherjee of the Congress and other UPA partners. Sangma, who headed a regional outfit, lost badly with Mukherjee getting more than twice the number of votes he got.

With the BJP never having the assurance of majority in earlier contests, except 2002 when it was in power at the Centre, some of its allies chose to back the winning candidate, notably the Shiv Sena in 2007 and the JD(U) and the Shiv Sena in 2012.

This time, its candidate Kovind did not get only the votes of all its allies but also many rivals parties like the BJD and the JD(U).