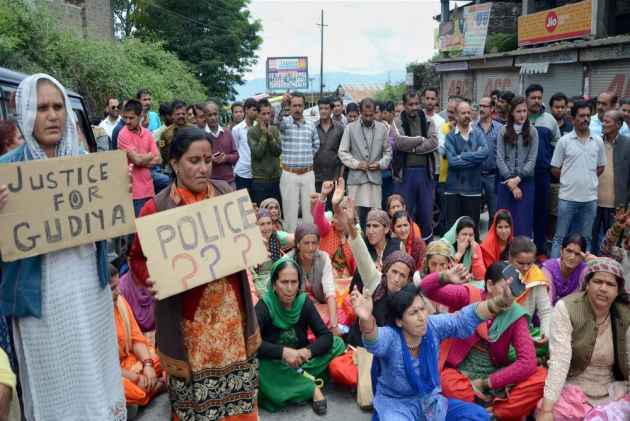 An angry mob went on rampage, ransacking a police station and pelting policemen with stones after a Nepalese labourer, held in connection with the Kotkhai rape and murder case was allegedly killed in the lock-up by another accused, officials said.

According to the police officials, last night Nepalese citizen Suraj had a heated argument with Rajendra, who was also arrested in connection with the same case.

Rajendra allegedly banged Suraj's head against a wall, leading to his death, a police official said.

IG (Southern range) Z H Zaidi said that Suraj had narrated the entire sequence leading to the rape incident and named Rajendra as the main accused.

Angered by the killing in the lock-up, a mob attacked the Kotkhai police station, setting ablaze vehicles and hurling stones, in which at least four policemen, including an ASP, were injured.

Furious protestors also blocked the Hatkoti-Theog and the Hindustan-Tibet highways for hours due to which hundreds of people were stranded.

The police faced a tough time even in shifting the injured to a hospital. After much effort, three of the injured policemen were admitted to a local hospital while one critically injured was referred to the Indira Gandhi Medical College here.

A recommendation for a judicial probe into the custodial death had been made, an official said.

To keep the situation under control, additional police force was rushed to Kotkhai, as the authorities feared the killing would trigger outrage.

The Kotkhai rape and murder case took place on July 4 and had led to protests and anger. Even the role of the police came in for much criticism.

A girl, student of class X, was raped and murdered in the Kotkhai area of Shimla district after she took a lift in a vehicle allegedly driven by Rajendra, according to the police.

The victim's body was recovered from the nearby Halila forest two days later.

Six persons, including Suraj and Rajendra, were arrested in connection with the case.

The High Court also summoned the state Director General of Police (DGP) and sought a report on the rape incident.

Governor Acharya Devvrat has also asked the state government to give a report within two days and also summoned the DGP.

In a letter addressed to the chief secretary, Devvrat said that the alleged rape and murder of the minor girl was a serious matter which had angered people across the state.

"Various organisations have submitted representations demanding stringent punishment to the culprits and the police must take effective steps to restore the confidence of the people," the letter said.

Meanwhile, Chief Minister Virbhadra Singh, who was on a visit to Mandi, said that Suraj was not the main accused and he was hit by another accused on his genitals and the matter is being investigated.

The party has called for a 'bandh' in Shimla and said it will stage demonstrations on July 21.