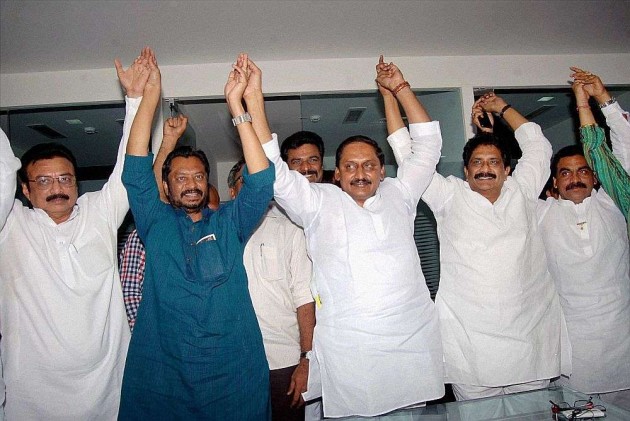 Former Andhra Pradesh Chief Minister N Kiran Kumar Reddy, who bitterly opposed creation of Telangana, today announced the name of his new political party and unveiled its office-bearers as he gets ready for the upcoming poll battle.

"Jai Samaikya Andhra" is the name of the party, reflecting its focus on Seemandhra, while its tagline is "Telugu vari atmagouravam" (self-respect of the Telugus).

Though it was expected that the party's name and other details would be announced at a public rally at Rajahmundry on March 12, Kiran suddenly declared the name at a press meet here this evening, saying "it's an auspicious moment".

Former MP Srihari Rao, who originally registered the party, will be the founder-President of Jai Samaikya Andhra, while Kiran will be its President.

Interestingly, another expelled Congress MP Rayapati Sambasiva Rao did not find place in the panel. Asked about it, the former Chief Minister said: "Those will come will come."

Another expelled MP Lagadapati Rajagopal, who hogged limelight when be used pepper spray in Lok Sabha last month during discussion on Telangana Bill, was not included because he vowed to take "political sanyas" if the State was divided.

"We did not force him (to join the party), as he has given a word to people. But Lagadapati will be our driving force," said Kiran, who resigned as CM and also quit Congress last month.

Other details and party agenda would be announced at the Rajahmundry meet, he added.