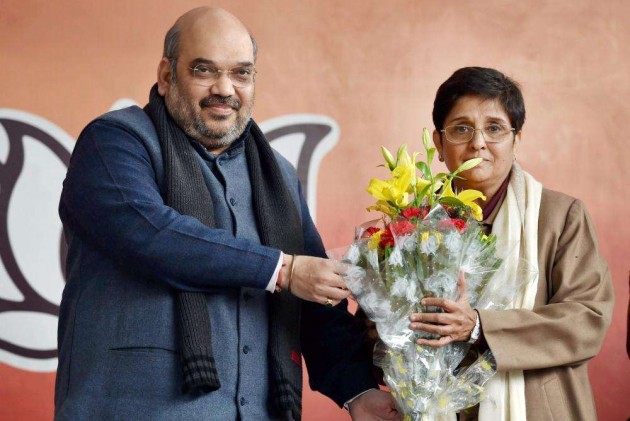 The 65-year old former IPS officer was inducted into the party fold in the presence of BJP President Amit Shah and Union Ministers Arun Jaitley and Harsh Vardhan, triggering speculation that she may be in the race for Chief Ministership if BJP wins the polls.

When asked whether she will be the party's Chief Ministerial candidate, Shah said party's Parliamentary Board will take a call on the issue after election results are out but added that her induction will "hugely strengthen" the Delhi unit.

He also announced that she will contest the polls but declined to answer whether she will be pitted against her former Team Anna colleague Arvind Kejriwal in the prestigious New Delhi constituency. "A decision about her constituency will be taken later."

"Bedi's constructive contribution will play an important role in ensuring that BJP lives up to the expectation of the people in the election and in any future government" Shah told a press conference at the party's headquarters.

Describing her as an able administrator who has been a crusader while in government and outside it, Jaitley said the party had been in touch with her for sometime and her joining it will make the party stronger.

"She has experience in governance and enjoys a credible image. She is associated with certain values. She has been a crusader in government as well as outside it for a long time," he said welcoming her to BJP.

Bedi, in her speech, pitched her leadership credentials and said she knows "how to work and how to make others work".

"I joined BJP due to the inspirational leadership of Prime Minister Narendra Modi. Delhi needs a strong, clear headed and stable government. We have to make it capital number one in the world," she said.

Bedi, the first Indian woman IPS officer, said she was in a "mission mode" and she took up a challenge only when she liked what it had in store for her.

"Time is precious for me... I always think what is the content of my job. We all have to work together. I will dedicate everything I have to Delhi, to country. I am very happy that BJP has given me this opportunity," she said.

She recalled that she had taken voluntary retirement after being "overlooked" for Delhi Police Commissioner's post as she did not find her then assignment "challenging" enough.

Praising Modi, she said the nation had seen "revival of hope" under him and it changed her as well. She had earlier decided to be fully dedicated to her social work but was not taking the plunge into politics.

She, however, made no mention of Aam Aadmi Party and its leader Kejriwal with whom she had a fallout after he decided to float a political party.

She had been sympathetic to BJP for a long time and praising Modi's governance in her tweets.