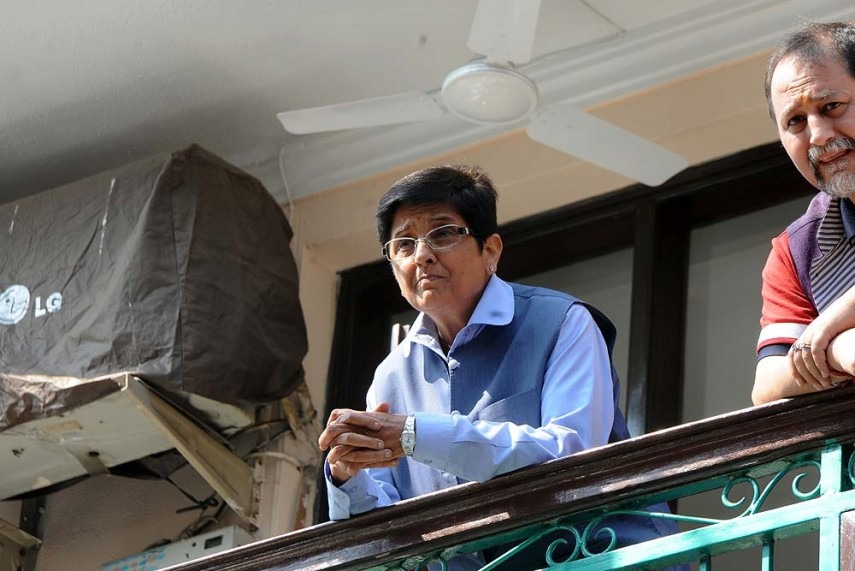 The swearing-in of three members nominated to assembly by Lt Governor Kiran Bedi has come under attack with Chief Minister V Narayanasamy terming it as "murder of democracy" and accusing her of working like a "BJP agent."

Narayanasamy hit out at Bedi for "committing mayhem of democracy by secretly inducting last night three members as nominated legislators."

He told reporters here that the induction of the three members - V Saminathan, BJP's Puducherry unit president, K G Shankar (its treasurer) and S Selvaganapathy (an educationist), with "utmost speed and secrecy betrayed the intention of the BJP and the lieutenant governor to act in utter violation of the statutory procedures."

The lieutenant governor "is also functioning like an agent of the Bharatiya Janata party," he said.

Narayanasamy said there is a speaker and an elected assembly and the induction of the members should be done only by the speaker. But Bedi had administered the oath "causing a murder of democracy. This act of the lieutenant governor deserves to be condemned in strongest terms," he said.

The ruling congress, meanwhile, also extended support to a bandh called by its ally DMK and other parties on July 8, a day after Bedi inducted the three nominated members.

Bedi on her sought to justify her action, saying that the swearing-in of the three nominated members by her was as per the provisions of the Union Territories Act, 1963.

In a WhatsApp message to mediapersons, Bedi said as per the Act, the nomination of the three members to Puducherry Assembly "is to be done by the Central government."

"It (the Act) only says so and nothing more. The Union Home Ministry sends the names to Puducherry government which then notifies it as was done by the Administration (in the present case)," she said.

The former IPS officer said the oath can be administered to the members by the Administrator as was done in this case.

Chief Minister Narayanasamy, however, alleged that right from the day Bedi assumed the office, she had been making allegations against the elected representatives and officials.

"She even went to the extent of writing to the CBI for a probe into the admission of students to the PG medical courses in deemed universities here."

He also alleged that Bedi had also been instigating a senior officer in Raj Nivas to file a petition against the government on the medical college issue in the court.

He said he had even challenged her to prove her allegations of malpractices in admission of students to the private medical colleges.

"She is yet to come out with any reply to my challenge to her to prove her allegations," he said.

Narayanasamy said as far as the Centralised Admission Committee here against which she had raised several allegations is concerned, it had been functioning in a transparent manner adhering strictly to the norms and instructions of the Medical Council of India and the Union Health Ministry in admission of students to private medical colleges.

"But intervention by the Lt Governor had dislocated the working of the committee," he said.

He said he had apprised the Union home minister and also the health minister of Bedi's "style of functioning" during his recent visit to Delhi.

Meanwhile, Congress ally, DMK besides the left parties and VCK have decided to observe a dawn-to-dusk bandh on Saturday to "condemn the violation of democratic norms by Lieutenant Governor Kiran Bedi in induction of three nominated members."

The bandh will be observed from 6 am to 6 pm, CPI leader N Kalainathan told reporters after a joint meeting of leaders of DMK, CPI, CPI-M and VCK.

The leaders condemned the Bedi's action and wanted the Centre to immediately recall her, he added.

"The induction of the three members has been done without adhering to the procedures. The lieutenant governor has acted arbitrarily and we condemn the action ...," he said.

Hitting out at the Centre, he said the Centre has given a go by to the democratic norms and principles by resorting to the "backdoor induction" of the members.

Health Minister Malladi Krishna Rao also took strong exception to the "manner of functioning of the Lt Governor" and said this was highly condemnable.

Saminathan, Shankar and local educationist Selvaganapathy nominated by the Union Home Ministry were sworn-in as members at a ceremony at Raj Nivas last night. Three of the eight opposition AINRC legislators alone were present to greet the nominated members.

Bedi has been at loggerheads with the congress government on many issues, including the one relating to the admission of students on government quota to post graduate medical courses in deemed universities and private medical colleges here.

There are 30 elected members in the assembly. The ruling Congress has 15 members while its alliance partner the DMK has two.

On the opposition bloc, the AINRC has eight members and AIADMK (AMMA) four legislators. There is one Independent.