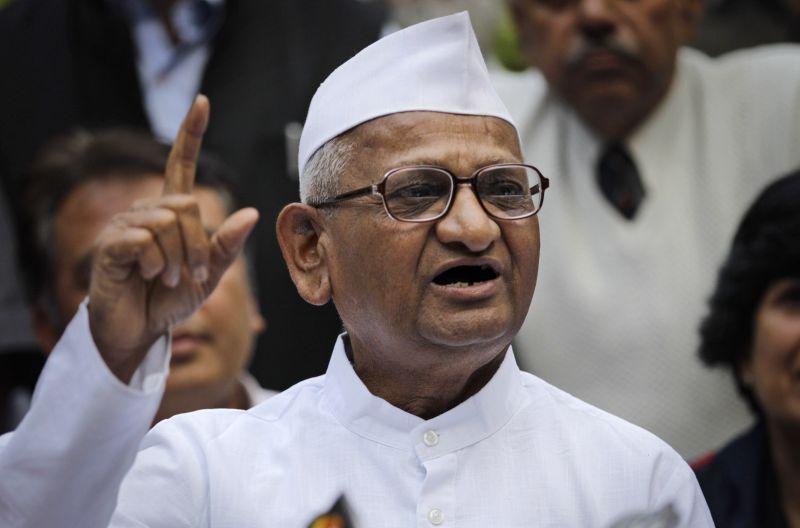 outlookindia.com
-0001-11-30T00:00:00+0553
Differences cropped up in Team Anna with Hazare today dismissing the amended Lokpal Bill as "ineffective" and a "betrayal" by the government but Kiran Bedi feels the new proposals address most of their concerns.

Addressing a press conference, Hazare threatened to go back to the people if the government did not keep its promise of bringing a strong Lokpal Bill. He specifically demanded making CBI and CVC independent bodies on par with Election Commission.

"The Government has been betraying us and people of the country repeatedly....If required, I will go back to Ramlila Maidan to demand a strong and effective Lokpal Bill," he said.

However, Bedi backed the proposed legislation and expressed happiness over the amended Bill paving the way for constitution of a collegium to select the chief of Central Bureau of Investigation.

"From nothing to something to more, as we move on! This is how we can read the lokpal bill! Unless we want to stay at nothing!" she tweeted. She also said most of the concerns have been addressed in the draft and cited the appointment of CBI chief and other changes as positive ones.

"(CBI's) its Anti Corruption wing has been brought under oversight of Lokpal. Which is what we needed!" she said.

Her remarks contradict Hazare's stand that the amended Lokpal bill was a "farce".

Rejecting the Lokpal Bill, Hazare said the fight against corruption will not be effective if government did not relinquish its control over CBI and CVC.

Hazare also criticised Prime Minister Manmohan Singh accusing him of failing to keep his promise on specific demands based on which he had ended his 12-day-long fast in August 2011.

The Union Cabinet yesterday amended the controversial Lokpal Bill, delinking it from the setting up of Lokayuktas in the states and transferring powers of sanction of prosecution against public servant to the ombudsman.

The Cabinet accepted 14 of the 16 recommendations made by the Rajya Sabha Select Committee, which was set up in May last year amid sharp differences among political parties because of which the legislation was stuck in the Upper House since December 2011.

Hazare said he will travel across the country to make people aware about "government's betrayal" and to motivate them to elect those with clean image in the 2014 general elections.

The activist alleged that Prime Minister Manmohan Singh has failed to keep his written promises on Lokpal, which he gave in August 2011, specially on three issues of bringing class I, II, III, IV employees under the purview of Lokpal, forming Lokayuktas in states and citizen's charter.

"In his letter, the PM had said that class I, II, III and IV officers would be brought under the Lokapl, Lokayuktas would be formed in states and citizen's charter would be prepared. But all these three points are missing from the one passed by the Union Cabinet," he said.

The Gandhian also said the government had not been true to its promises since he started his agitation on the issue two years back. "If government will keep on telling lies then what will happen to the country."

Asked about Rahul Gandhi's statement that "power is poison", he said if it is poison, then "why the government and the parties are after it and why don't they leave it. It's not poison but it is like addiction."

On the issue of Gujarat Chief Minister Narendra Modi being projected as future Prime Minister, the activist said, "I have doubts that if he becomes Prime Minister he would do any good for the country... He had not appointed a Lokayukta in his state then, how can we expect a Lokpal from him".

On being asked about supporting his old colleague Arvind Kejriwal, who formed Aam Aadmi Party, he said, "I will not support him or his party or any party. I will support any individual who has a good character and a clean image."
Continue FREE with Ads Pay Rs. 1 to Read Without Ads
READ MORE IN:
Manmohan Singh Kiran Bedi Anna Hazare India Against Corruption Team Anna National
Next Story : Shirdi's Saibaba Trust Got Rs 275 Crore Donation in 2012
Download the Outlook ​Magazines App. Six magazines, wherever you go! Play Store and App Store