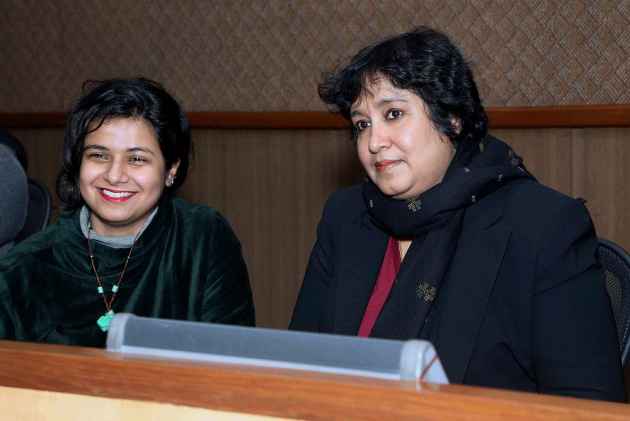 Renowned Bangladeshi author Taslima Nasreen feels killing people for eating beef is not intolerance but a 'heinous crime' and it should be stopped.

"It is not that suddenly intolerance has started here... India as a country is not intolerant as India has Constitution and laws which do not support intolerance. But some people are intolerant everywhere...Because of strict laws you cannot practise intolerance. Here, so many secularists protested against intolerance, that is a good sign," she said.

"Killing people for eating beef is not intolerance but a heinous crime. It needs to be stopped," Taslima, who was in Kerala recently to participate in the Kozhikode Literary Festival, told a Malayalam television channel.

Asked if she wants to be a citizen of India, now with Prime Minister Narendra Modi being at the helm, Taslima said she feels that the Indian government is "neutral and secular".

She said she would be more than happy if government allows her a residence permit. "If I am allowed to reside in India, I will be more than happy," she said, adding, the central government's recent decision to grant Pakistani singer Adnan Sami, Indian citizenship, was a "good sign".

Pakistan should not have denied visa to Bollywood actor Anupam Kher to participate in Karachi literary festival, she said. However, after Pakistan's u-turn on the issue, Kher should have gone, she said.

Citing the example of BJP veteran L K Advani's visit to Pakistan years ago, she claimed he (Advani) "became secular and a better man. There are many people who love India, all are not anti-India, anti-Hinduism or fundamentalists," she said.

On her 21-years of exile in Europe, US, and in India, she said when she was living in Europe she felt like an "outsider" as it was not her country and always yearned to go back to Bangladesh.

However, as she was not permitted to return to her land, she decided India was a 'better place' as people love her in West Bengal, her books get published and she has received many awards.

However, when she was attacked by fundamentalists in Hyderabad, the then Communist government in West Bengal failed to support her and asked her to leave the state, where she was under house arrest.

"People said it was to appease Muslim fanatics that I was asked to leave," she said.

As she was not wanted in Rajasthan either, then UPA government asked her to leave India and promised to do everything for her in Europe, the author said.

The 52-year-old author's visa was extended for a year by the Home Ministry in August last.

Asked if she felt there was political pressure on the government in asking her to leave India, Taslima said she writes for secularism, women's rights, human rights and humanism.

Indian women should have their own rights and freedom. "It is a patriarchal society. People are misogynists. Rape, domestic violence, female infanticide are common here."

On the recent attack on a Tanzanian student in Bengaluru, she said, "People are racists in the sub-continent.I think people in India, Bangladesh and Pakistan hate black skin."

Well-known for her novel Lajja (Shame), she said many of her Bangladeshi blogger friends who supported her, have been killed. "They all supported me. Now they are dead... brutally killed by fundmentalists."

Pointing out that during the 1980s many people did not notice Islamisation was taking root in Bangladesh, she said, "They didn't believe what I was saying. At that time I could write whatever I wanted in newspapers, I could criticise Islam. Now it is impossible..," she said.

Taslima said when she was young, many women did not wear hijabs. But, now, most women are wearing hijabs and bloggers protesting against Islamisation of Bangladesh are being killed.

Describing India as a "beautiful country" where several customs, religions, culture and languages co-exist, she said, "Sometimes incidents do happen but it's a peaceful country. It is amazing. I hope neighbouring countries learn from India and try to become a true democracy and secular country."

The author, who has written 42 books in Bengali, including essays, novels and poems, said she wants to write more.