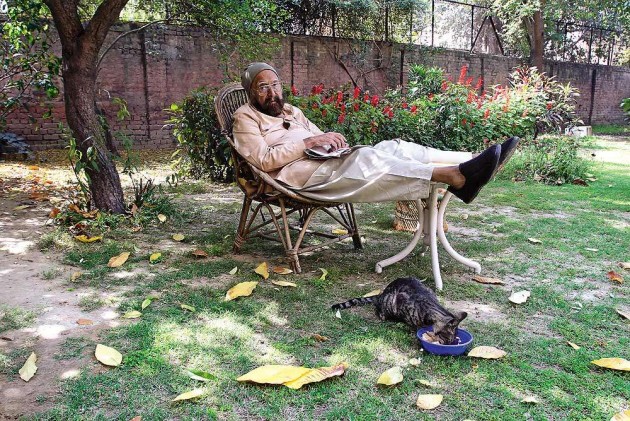 A fistful of ashes of legendary Indian journalist and author Khushwant Singh have been brought to his birthplace in Pakistan's Punjab province to fulfill his desire to be "reunited with his roots".

"The son returned to his soil after 99 years," said Muhammad Hayat, ex-head master of the Government Boys' High School, Hadali, where Singh studied.

Hadali, some 280 kilometers from here, is a town of Khushab district in Punjab province and was the birthplace of Singh, who passed away on March 20 in New Delhi.

His ashes were mixed with cement to fix a marble plaque under a Shisham tree where he played as a child.

Pakistani writer and columnist Fakir Syed Aijazuddin brought Singh's ashes from India to fulfill his desire to be "reunited with his roots".

The plaque reads: "A Sikh, a scholar and a son of Hadali Punjab. This is where my roots are. I have nourished them with tears of nostalgia."

After fixing the plaque, Aijazuddin read before the teachers, students of the school, and locals the morning and evening prayers of the Sikhs.

Among the excited crowd were the headmaster and teachers who met Singh on his last visit to Hadali in 1987.

"A large number of Hadalians turned up in 1987 to welcome Khushwant Singh at his hometown. Addressing us, Singh said as you go on pilgrimage to Makkah and Madina coming back to Hadali at the time of Maghreb of my life is my Hajj and my Umera (pilgrimage)," Muhammad Farooq Rana, headmaster of Government High School Hadali, recalled.

Talking to PTI, the headmaster said: "We were very much excited after learning that a fistful of ashes were being brought back to his birthplace. The people are proud of Singh."

"While installing the marble plaque, I felt Khushwant Singh's invisible presence among us. It was almost as if he had crossed the border with me just to be present at Hadali," Aijazuddin told PTI.

"Singh's readership knows no boundaries. He has as many admirers in Pakistan as he does in India. Perhaps this was another reason for his deep attachment to Pakistan and his origin."

"It was when I last met with Khushwant Sahib in New Delhi on March 4 he expressed longing to be buried in Hadali. His family agreed to make available some of the ashes which I brought to Pakistan," he said.

Singh's house in Hadali does not exist anymore. All one finds in its place are wild bushes and the plot is said to have been acquired by a local resident.

Born in 1915 in Hadali, Singh was witness to some major events in modern Indian history - from independence and partition to the emergency and Operation Blue Star - and had known many of the figures behind them.