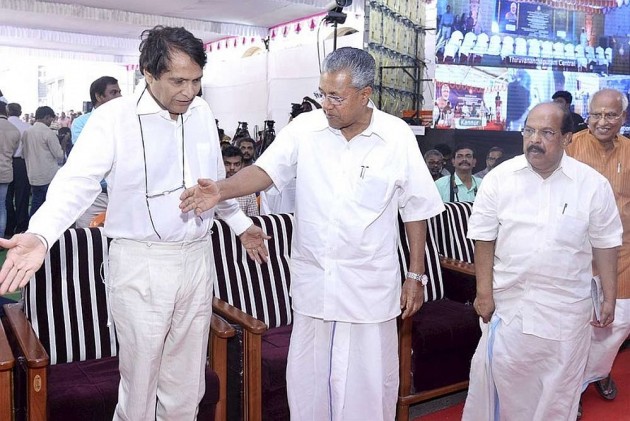 Print
A
A
A
increase text size
Outlook January 16, 2017 14:38 IST Kerala CM Tags The Modi-Gandhi Calendar Row As An 'Act Of Sheer Pettiness'

Kerala Chief Minister Pinarayi Vijayan today hit out at the BJP-led NDA government for replacing the photo of Mahatma Gandhi with that of Prime Minister Narendra Modi on the calendars and diaries of Khadi and Village Industries Commission saying it is an "act of sheer pettiness".

"People who didn't contribute anything in the Independence struggle are now not even sparing the image of Gandhi," the CPI-M leader said in a Facebook post.

He said replacing Gandhi's image with that of Modi is an act of "sheer pettiness".

"A Prime Minister should not have stooped to such a level," Vijayan said, adding, "the image of Gandhi spinning wheel is one that remains in the heart of the people".

Alleging the BJP government is "implementing the RSS agenda", Vijayan said "each step of the Centre is in tune with the RSS' move to destroy secularism in the country."

Vijayan said all secular-minded people in the country should unite to face the "challenges posed by RSS".

A controversy had erupted last week when KVIC published their calendar and diary with a photo of Modi weaving khadi on a charkha (spinning wheel).

Vijayan also came down on BJP leaders in the state for their criticisms of Malayalam film director Kamal and said no one has the right to demand another person leave the country.

Sangh Parivar affiliated outfits had slammed the director over his alleged remarks in connection with the playing of national anthem during the screening of films at the IFFK last month.