Kejriwal Thanks Wife for 'Always Being There' 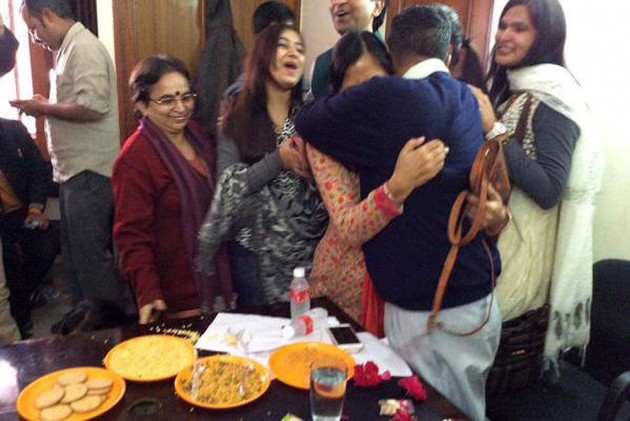 Print
A
A
A
increase text size
Outlook February 10, 2015 13:04 IST Kejriwal Thanks Wife for 'Always Being There'

Surrounded by joyous supporters, AAP chief Arvind Kejirwal today made sure to thank his wife Sunita with a warm hug "for always being there."

Kejriwal had met Sunita at the National Academy of Administration at Mussoorie during their training period after both of them qualified for the Indian Revenue Service (IRS).

As the former Delhi Chief Minister spoke to party workers for the first after the staggering victory of his party, an ecstatic Sunita, who is an IRS officer, quietly stood by his side.

Addressing the party workers, Kejriwal said the victory would not have been possible without her constant support and understanding.

"She never comes in the picture but she is always there. It would not have been possible for me to achieve anything if she was not there," he said.

Kejriwal often fondly remembers the day he proposed to Sunita, saying, "One day I knocked at her door in the academy and proposed to her. She said yes."

The couple have two children, daughter Harshita, who studies at IIT Delhi, and son Pulkit. Kejriwal also has a younger sister and brother.

He stays with his parents at Kaushambi in a flat alloted to his wife in her capacity as an IRS officer.