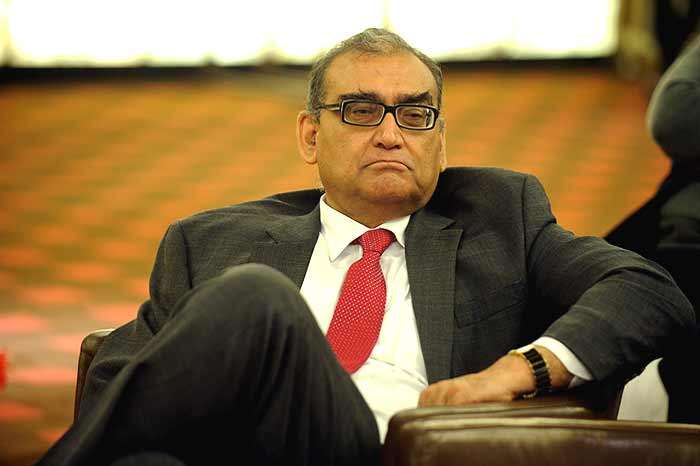 Stoking a fresh controversy, Press Council of India (PCI) chairperson Justice Markandey Katju today alleged that the then Chief Justice of India (CJI) K G Balakrishnan had pushed for the elevation of a Madras High Court judge with "bad reputation" to the Supreme Court.

He said that the collegium headed by Justice Balakrishnan and also having Justice S H Kapadia "almost succeeded" in bringing the judge to the apex court but lawyers in Tamil Nadu thwarted it by producing "voluminous documentary evidence of his corruption."

Justice K G Balakrishnan, chairman of the National Human Rights Commission (NHRC), was not immediately available for comments with his office stating that he is on an official tour to Malaysia and will be back this weekend.

A former judge of the Supreme Court, Katju made the fresh claims on his blog while also reacting to remarks made by Justice Kapadia, in response to his yesterday's post. Justice Kapadia had said that he had not brought to Supreme Court any unfit judge.

"I may remind him (Kapadia) that the Supreme Court collegium, headed by (then) CJI K G Balakrishnan, and of which Justice Kapadia was a member, almost succeeded in bringing a totally unfit person into the Supreme Court," Katju said.

"That judge was a judge of the Madras High Court when I was Chief Justice there, so I knew all about his bad reputation. Later, he was made Chief Justice of another High Court, and was being considered for elevation to the Supreme court," he further said.

Katju said that one day during lunch interval, he went to Justice Kapadia's chamber and told him about the "bad reputation" of that judge, giving details.

"I told him that I was not in the Supreme Court collegium, but he was, and now it was for him to do whatever he thinks proper, and I have done my duty. There was no use informing Justice Balakrishnan since it was he who was pushing for the judge's elevation to the Supreme Court," he wrote.

Katju further said that after listening to him, Justice Kapadia thanked him and said that in future also if he has such information it should be passed on to him.

Former Attorney General Soli Sorabjee said the collegium system is not perfect but attacking it the way it has been by a former SC judge is not desirable.

"You cannot level personal attacks like this on Chief Justice and some of the other judges," he said responding to Katju's blog.

Former High Court judge RS Sodhi said the judiciary should not be treated in this manner. "Don't go around maligning it because you are going to be undermining the efficacy of the institution. Judiciary cannot be called corrupt like that."

Senior advocate Majeed Memon said the faith of the common man in judiciary is shaking. "We should work together not only to sustain but also enhance the faith of the people in the system," he said.

Katju recalled that the judge in question was consequently transferred to a small High Court, and later impeachment proceedings were brought against him in Parliament, which lapsed when he resigned.

"So Justice Kapadia's claim that he did not bring any corrupt judge to the Supreme Court, has to be qualified by at least one instance where he (or rather the collegium of which he was a member) almost succeeded," Katju said.

He further added that even though he had informed Justice Kapadia about that "judge's reputation", neither the collegium, nor Justice Balakrishnan ever consulted him on the matter.

Katju said that he had later reminded Justice Kapadia that he had informed him about the "bad reputation" of that judge, but no heed was paid to his words. " I said that the Supreme Court could have been saved so much embarrassment if my advice had been sought," Katju wrote.

"Justice Kapadia admitted that I had informed him, but said that Justice Balakrishnan, the CJI, was adamant, and so the recommendation was made," he added.

In his blog, Katju also picked up the thread from his previous post, saying he had given to Justice Kapadia, then CJI, three mobile numbers of agents of a very senior Allahabad High Court judge against whom there were serious allegations of corruption, and requested him to get those numbers tapped through intelligence.

"He did as I requested, and some time later he told me that the conversations taped on those numbers established the corruption of the judge. Despite this, Justice Kapadia took no action against this judge (although he did not make him Chief Justice of any High Court or Judge of the Supreme Court)," Katju wrote.

"In response to my statement, Justice Kapadia has said that he did not remember this. It is strange that he has no recollection of this, but the record would be existing with the intelligence agency concerned, and perhaps also in the official file of the Chief Justice," he added.