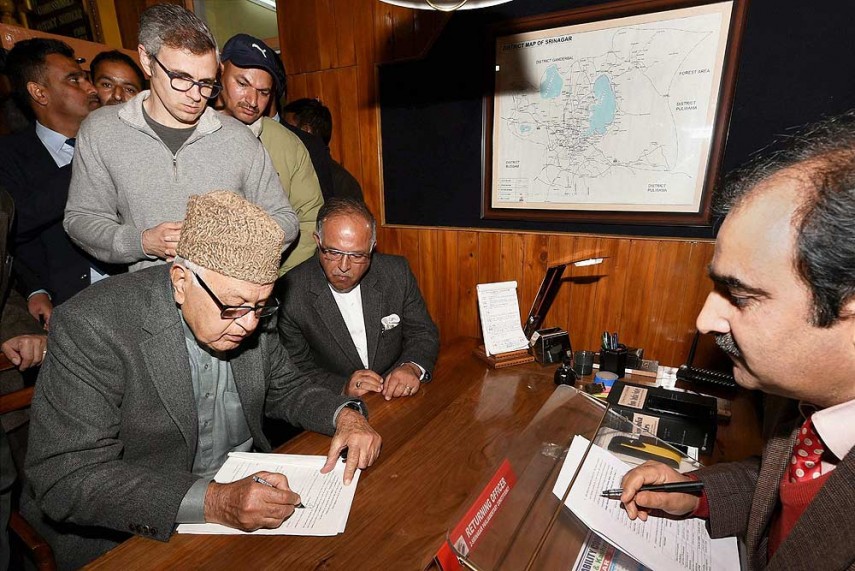 Lacking pomp and show, the vehicles of the politicians entered into the premises of the Deputy Commissioner's office here as the police had barricaded the entire area as part of the security arrangements to prevent any untoward incident.

Unlike 2014 elections, when the candidates filed their nomination papers with hundreds of supporters, the scene this time was quite different as police and paramilitary personnel dotted the area.

The Kashmir valley had witnessed huge protests last summer after Hizbul Mujahideen militant Burhan Wani was killed in an encounter with the security forces.

Over 80 people were killed and hundreds other injured in the protests which continued for more than three months.

The elections, which will be held on April nine, were necessitated after PDP MP Tariq Hamid Karra resigned from the Lok Sabha and the party, alleging mishandling of situation in Jammu and Kashmir by Chief Minister Mehbooba Mufti.

The NC has a pre-poll alliance with Congress while the PDP is fighting alone. The BJP, which is having a tie-up with the PDP in the government, is not contesting the bypolls.

Khan, who had joined PDP in January after unsuccessfully contesting against Omar from Beerwah assembly seat in 2014 on Congress ticket, was accompanied by senior PDP leaders Muzzafar Hussain Baig and Imran Ansari.

While Abdullah, who faced defeat from this Lok Sabha seat in 2014, drove to the party office to address joint convention of NC and Congress workers.

After filing his nominations, Khan told reporters that he was sure of his victory as his opponent was a "discredited candidate".

He also alleged that Omar had won the Beerwah assembly seat through fraudulent means.

Srinagar has traditionally been an NC bastion as the party has won 11 out of 14 elections. Blowing the election bugle at NC office, Abdullah defended the decision of having an alliance with Congress saying "elections will be tough...Your support is needed for this fight. Not just for the state of Jammu and Kashmir, but for the whole country. We have to save this country."

Abdullah flagged the importance of friendly relations with Pakistan saying Jammu and Kashmir cannot be saved until there is friendship between the two countries and for that the alliance will have to work together.

He said if the two parties succeed in the bypolls, they would "try to awaken the conscience of the people inside the Parliament".

The polling in south Kashmir is scheduled for April 12.