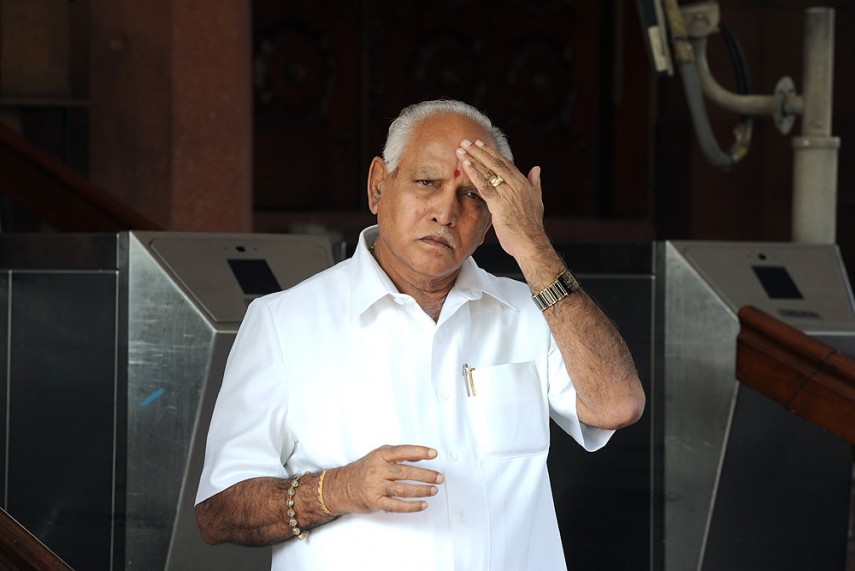 Water wars with neighbouring Tamil Nadu and Goa over Cauvery and Mahadayi rivers marked the high point of variegated developments from Karnataka during 2016 that also saw BJP strongman B S Yeddyurappa's return to state politics with a target to regain power in the next Assembly polls in 2018.

The Congress government in the state that managed to win only one of the three seats that went for bypolls during the year also had to face embarrassment with a minister having to quit over an alleged sex CD scandal and another being caught on camera scrolling through sleazy pictures on his mobile at a public function.

Chief Minister Siddaramaiah, who has been facing murmurs of discontent within the party after his decision to sack 14 ministers and to induct an equal number of them, was also embroiled in a controversy over owning an expensive Hublot watch.

With an eye on 2018 assembly polls, BJP appointed Lingayat strongman Yeddyurappa. Considered as the clear contender for the chief minister's post, Yeddyurappa has set a target of 150 seats.

JD(S) too was troubled by dissidence and had to sack eight of its MLAs for cross voting in favour of Congress during Rajya Sabha polls.

One such incident had led to resignation of minister K J George who along with two senior IPS officials were named by DySP M K Ganapathy in an interview to a TV channel before committing suicide. George returned as minister after being given a clean chit in a probe.

On the business front in the state, the legal battles involving liquor baron Vijay Mallya, change of guard at Wipro with Abid Ali Neemuchwala taking over as new CEO, top management rejig at e-commerce major Flipkart made headlines.

The launch of the first squadron of two Light Combat Aircraft (LCA) Tejas, and series of successful satellite launches by Bengaluru-headquartered ISRO including the flight of reusable launch vehicle - technology demonstrator and launch of 20 satellites in a single flight, showcased India's technological and engineering prowess to the world.

Also, killings of BJP and Sangh Parivar activists in the state and cash-for-vote sting operations during the Rajya Sabha elections were among the other issues from Karnataka that dominated the national headlines.

Karnataka found itself amid a legal and political battle on the Cauvery and Mahadayi rivers water sharing disputes on which the state has locked horns with neighbouring Tamil Nadu and Goa respectively.

The state witnessed large-scale violence as successive court and tribunal's decisions on both the issues were not in favour of Karnataka. Two persons were killed during the Cauvery-related violence in Bengaluru in September following the Supreme Court's directive to release water to Tamil Nadu, which also triggered widespread arson.

Following the Supreme Court's successive directives to release Cauvery water to Tamil Nadu, two special sessions of the legislature were held in a span of 10 days to decide on the state's course of action following the court's directive.

Karnataka legislature through a unanimous resolution had decided to use water at reservoirs only for its drinking water needs, but later altered it after court warned about the "wrath of the law".

On the Mahadayi water issue also, the state has for long been demanding Prime Minister's intervention to resolve the issue with Goa over water sharing.

Karnataka's petition to the Mahadayi tribunal seeking the release of 7.56 tmcft of water for the Kalasa-Banduri Nala project was rejected in an interim order on July 27, leading to violence in the northern districts of the state.

A blockbuster wedding of mining baron and former minister B Janardhan Reddy's daughter marked by unmitigated opulence that took place at the sprawling Palace Grounds last month had raised a firestorm of controversy.

The five-day extravaganza with ceremonies held against the backdrop of lavish settings that concluded with the ostentatious wedding stirred a huge row over its timing when people across the country are reeling under cash crunch after demonetisation of high value currencies.

After the opulent wedding, Reddy, who had come under the scanner of the IT department, is now at the centre of a fresh row, with the car driver of a state official allegedly committing suicide, leaving a note claiming he got Rs 100 crore converted into white money for the the marriage.

In a huge relief to Yeddyurappa, a special CBI court here in October acquitted him along with his two sons and son-in-law in a Rs 40 crore illegal mining case, which had cost him chief ministership in 2011 following indictment by the then Lok Ayukta Santosh Hegde. He had spent about three weeks in jail in October 2011, before he was granted bail.

'Sting operations' that purportedly showed MLAs negotiating money deal in exchange for their votes in the biennial elections to four Rajya Sabha seats from the state also made national headlines this year.

The footage by one channel showed a JD(S) MLA purportedly talking about money in crores of rupees for supporting a candidate while the one by another channel showed Congress candidate KC Ramamurthy and independent MLAs purportedly speaking about getting enhanced development funds for the constituency by the government in return for votes.

Political slugfest had erupted in the state following these sting operations, with demands for Election Commission's action and countermanding of elections.

Mired in a controversy over a luxury watch gifted to him, Siddaramaiah had to hand over it over to the Speaker amid uproar in the state Assembly, declaring it a state asset.

The controversy was fuelled by former Chief Minister HD Kumaraswamy, who had claimed the diamond-studded Hublot watch was worth Rs 70 lakh and had been gifted to Siddaramaiah and that he had proof for his claims. BJP had sought a probe by the Enforcement Directorate to find out the owner of the watch and whether customs duty had been paid for it.

In a major embarrassment to the Siddaramaiah government, stung by an alleged sex CD scandal, Excise Minister H Y Meti resigned on December 14 with government ordering a CID probe into the entire purported episode over the charge that he sought sexual favour from a woman in return for help.

Meti's exit came days after the alleged scandal erupted with the 71-year-old minister, considered close to Chief Minister Siddaramaiah, submitting his resignation to him, saying he was doing so of his own accord to avoid embarrassment to the government.

Siddaramaiah was also left red-faced as Minister for Primary and Secondary Education Tanvir Sait had on November 10 stirred a controversy after video footage emerged showing him purportedly watching pictures of skimpily-clad girls on his mobile on dais at a public function to mark Tipu Jayanti celebrations in Raichur district.

While the chief minister and the Congress sought to give him a clean chit, even before cyber crime investigating into the issue submitted its report, Opposition parties demanded his resignation. The recent winter session of the state legislature at Belagavi also saw disruptions over the issue.

Following the killings of BJP and Sangh Parivar activists in various parts of the state, BJP has been seeking NIA probe into the incidents. Alleging Kerala-based Popular Front of India (PFI)'s hand behind it, they have also sought its ban.

A senior PFI functionary was arrested earlier this month in connection with the murder of Rudresh, an RSS worker in Bengaluru. Rudresh's gruesome murder had created tensions in parts of Bengaluru with Sangh Parivar affiliate organisations staging protest. (MORE) On the business front in a top management rejig,

Liquor baron Vijay Mallya is engaged in a legal tangle at various courts across the country, including the Debt Recovery Tribunal here, which is hearing on the recovery of over Rs 9,000 crore loan incurred by SBI-led consortium of banks.

Mallya, who left the country on March 2 and is now in UK, has been declared a proclaimed offender by a special PMLA court in Mumbai on a plea by Enforcement Directorate in connection with its money laundering probe against him in the alleged bank loan default case.

After India's indigenous basic trainer aircraft, Hindustan Turbo Trainer-40 (HTT-40), made its inaugural flight in June, home-grown Light Combat Aircraft (LCA) Tejas was inducted into the IAF in July after a tortuous saga spread over 33 long years with the launch of the first squadron of two aircrafts here, in a major milestone in the country's military aviation.

Some of Bengaluru's civic development issues also caught the national attention during the year, one being state government's firmness in going ahead with the proposed steel flyover worth about Rs 1800 crore to connect the airport and surrounding areas amid opposition from citizen groups, environmentalist and opposition parties, citing various reasons including lack of transparency.

Chennai-based southern bench of the National Green Tribunal has stayed the project.

The second was Bruhat Bengaluru Mahanagara Palike (city civic body) during the year conducting encroachment clearance drive in several parts of the city hit by inundation due to usurpation of storm water drains. The large-scale demolition houses led to protest by affected citizens.

Government armed with the court's approval for the drive also admitted to fault on part of the officials and lodged criminal cases against 20 officials and few developers.