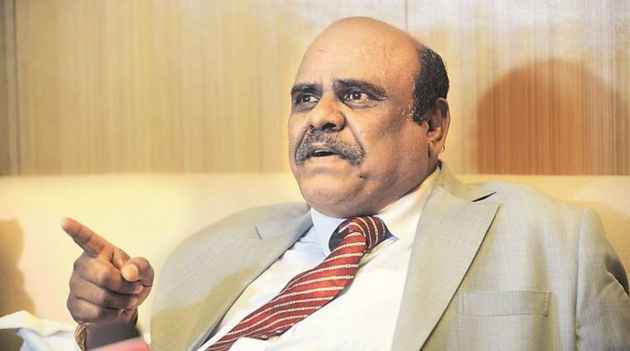 Controversial high court judge C S Karnan was liable to be punished for his "grossest and gravest actions" of contempt of court through "unsavoury" acts and behaviour and his utterances had turned the judicial system into a "laughing stock", the Supreme Court has said.

The apex court, which came out with a detailed verdict on the six-month jail term awarded to Karnan, then a sitting judge of the Calcutta High Court now retired, said his case was "unfortunate" as it concerned action against a sitting judge which had drawn the attention of both domestic and foreign media.

It said even after the Supreme Court intervened in the matter, Karnan "continued to foul-mouth his colleagues" at the Madras High Court by addressing communications to the highest executive and judicial authorities, including the Prime Minister.

"His demeanour was found to have become further aggressive after this court passed orders from time to time in this case," the top court said.

The apex court today uploaded on its website the detailed judgement signed yesterday. There are two sets of concurring verdicts, totalling 80 pages. The court had passed a brief order on May 9.

Karnan, who was absconding since May 9, was arrested by the West Bengal Police on June 20 from Coimbatore in Tamil Nadu and has been lodged in Kolkata jail since then. He is the first sitting judge to be jailed.

The apex court, which had set up a medical board to examine Justice Karnan, assumed him to be medically and mentally fit in the absence of the report submitted by the panel of doctors.

"We are of the view that psychiatrists on the Board of Doctors, would have been in opposition to evaluate the mental health of Justice Karnan during the above interaction.

"Had they found anything remiss, they would have informed this Court accordingly. Since no report has been submitted by the Board of Doctors, we would assume, that they had found nothing significant enough to report.

"We would, therefore, accept the assertion of Justice Karnan, that he is medically and mentally fit, to defend himself," the detailed order said.

The top court said Karnan had levelled "obnoxious" allegations against 33 judges from the Supreme Court, Chief Justices of High Courts, but mostly against the judges of the Madras High Court.

"The contents of the letters addressed by him contained scandalous material against judges of High Courts and the Supreme Court. This correspondence was addressed to the highest constitutional authorities, in all three wings of governance – the legislature, the executive and the judiciary," the bench said.

Justice Khehar wrote the main judgement on behalf of himself and Justices Misra, Lokur, Ghose and Joseph. Justices Chelameswar and Gogoi wrote the second order.

During the interregnum of May 9 and July 4, Justice Ghose retired on May 27 and it was widely speculated how the detailed judgement would be delivered.

Justices Chelameswar and Gogoi, in their order, expressed concern over the prevailing system of appointment of judges for higher judiciary saying that Justice Karnan's case calls for revisiting the process of selection of judges to the constitutional courts.

The two judges said this case highlighted the need to set up appropriate legal regime to deal with situations where the conduct of a judge of a constitutional court requires to take corrective measures other than impeachment.

"This case, in our opinion, has importance extending beyond the immediate problem. This case highlights two things: (1) the need to revisit the process of selection and appointment of judges to the constitutional courts, for that matter, any member of the judiciary at all levels;

"And (2) the need to set up appropriate legal regime to deal with situations where the conduct of a Judge of a constitutional court requires corrective measures - other than impeachment – to be taken," Justices Chelameswar and Gogoi said.

Justice Khehar, writing the judgement for himself and four other judges, started stating that "The task at our hands is unpleasant. It concerns actions of a judge of a High Court. The instant proceedings pertain to alleged actions of criminal contempt, committed by Shri Justice C S Karnan."

"The initiation of the present proceedings suo motu, is unfortunate. In case this court has to take the next step, leading to his conviction and sentencing, the court would have undoubtedly travelled into virgin territory. This has never happened. This should never happen.

"But then, in the process of administration of justice, the individual's identity, is clearly inconsequential. This Court is tasked to evaluate the merits of controversies placed before it, based on the facts of the case. It is expected to record its conclusions, without fear or favour, affection or ill-will," the CJI said.

"His public utterances, turned the judicial system into a laughing stock. The local media, unmindful of the damage it was causing to the judicial institution, merrily rode the Karnan wave. Even the foreign media, had its dig at the Indian judiciary.

"None of his actions can be considered as bona fide, especially in view of the express directions issued by this court on February 8, 2017, requiring him to refrain from discharging any judicial or administrative work," the apex court said.

The bench also observed that after levelling allegations against 33 judges, Karnan shielded himself from actions by "trumpeting his position, as belonging to an under-privileged caste".

"We are of the considered view, that Justice Karnan shielded himself from actions, by trumpeting his position, as belonging to an under-privileged caste. By assuming the above position, he levelled obnoxious allegations against innumerable judges of the Supreme Court, Chief Justices of the High Courts, but mostly against judges of the Madras High Court," it said.

The court said that none of the allegations levelled by Karnan were supported by any material and his allegations were "malicious and defamatory, and pointedly by name, against many of the concerned Judges".

"He carried his insinuations to the public at large, in the first instance, by endorsing his letters carefully so as to widely circulate the contents of his communications, to the desired circles.

"Some of his letters were intentionally endorsed, amongst others, to the President of the Tamil Nadu Advocate Association. And later, through the internet, he placed his point of view, and the entire material, in the public domain," he said.

It said that even during the course of hearing of the contempt matter in the apex court, his "ridicule" of the top court remained unabated.

"In fact, it was heightened, as never before. In this process, he even stayed orders passed by this Court. One of the orders passed by him, restrained the Judges on this Bench, from leaving the country," it said.

"By another order he convicted the Judges on this Bench, besides another Judge of this Court, and sentenced them to 5 years imprisonment, besides imposing individual costs on the convicted Judges," it said.

"From the narration expressed in the preceding paragraphs, we have no hesitation in concluding, that the actions of Shri Justice C S Karnan constituted the grossest and gravest actions of contempt of Court. He has also committed contempt, in the face of the Court.

"He is therefore liable to be punished, for his unsavoury actions and behavior. We are satisfied that he should be punished for his above actions, with imprisonment for six months. Ordered accordingly.

The court also observed that "mindset" of Karnan emerges from a communication of January 3, 2017, addressed by him to the Prime Minister in which he had levelled allegations against several judges.