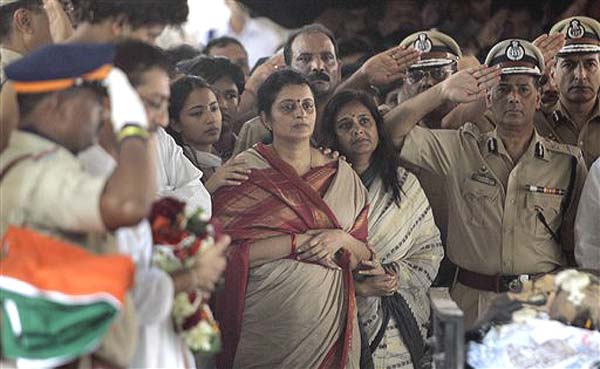 outlookindia.com
-0001-11-30T00:00:00+0553
The widow of slain Maharashtra ATS chief Hemant Karkare today slammed senior Congress leader Digvijay Singh for claiming that her husband feared for his safety from hardline Hindu groups, who were upset over his probe into the Malegaon bomb blast.

Talking to reporters here, Kavita Karkare accused Singh of playing votebank politics and denied that any conversation had taken place between her husband and the Congress leader, as claimed by the latter.

Kavita said it was wrong to suggest that Hindu groups were linked to the 26/11 terror attacks. "Such statements will mislead people and benefit Pakistan."

"Mockery of my husband's sacrifice for political gain should stop," she said.

Singh has said hours before 26/11 attacks, Karkare had called him to say his life was under threat. The Congress leader said Karkare was depressed and worried by threats and personal attacks made in newspapers of Hindu organisations.