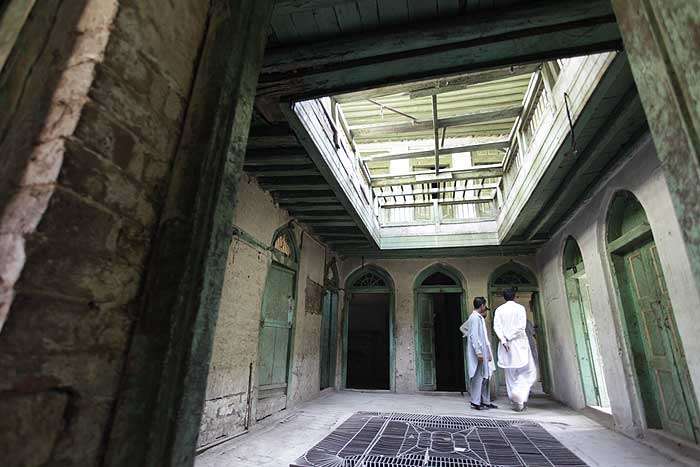 The dilapidated ancestral home of Indian film industry's celebrated Kapoor family in Pakistan's north-western city of Peshawar may crumble soon, according to a media report.

The Kapoors lived in Dhakki near Peshawar's Qissa Khwani Bazaar -- the famous street of storytellers -- before partition.

A Dawn report today delved on the depressing state of the building that once housed the Kapoors.

"The air inside their old (Kapoor) haveli is still, the gloom in the empty rooms is like time mourning its own passage, a surrender to dust, to dampness and to death. It is the indifference of a terminal patient to a visitor who brings no hope but stands by the bed," the paper reported.

The reporter of the newspaper, who visited the home, says he treaded "carefully as rubble falls from the roof, wary of breaking a mold-infested floorboard and go down to the dark basement where the building may collapse on itself one day if not saved soon."

"It will add to the debris under Dhakki, the old city neighbourhood built over a mound of rubble beneath which lie many lost civilisations."

The report speaks of the nostalgia that Raj Kapoor evokes. According to the reporter, he entered the house through a hole in the back wall to see the creak of rusty hinges tearing through the silence.

It also appreciated the house's magnificent façade and ornate jharokas fit for a royal palace in some princely state.

"The haveli stands silent, crumbling. People walk by, indifferent to the building or its significance."

Next on the trail of ancestral homes of famous Bollywood actors from Peshawar was Shah Rukh Khan's.