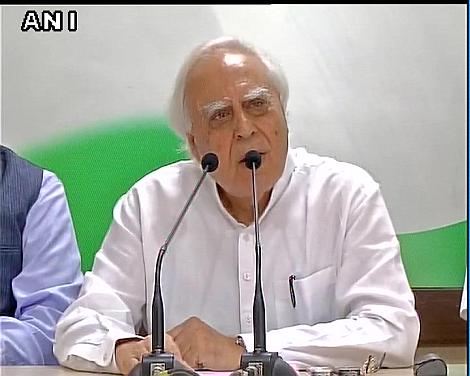 The war of words over the surgical strikes escalated further today with Congress hitting back at BJP chief Amit Shah asking him whether those spending time in jails will now point out faults in the party's foundations.

Congress leader Kapil Sibal also defended Rahul Gandhi's accusation that Prime Minister Narendra Modi was "trading in the blood of soldiers", saying the party Vice President knew what he was saying and people of the country understand the sentiment behind his words.

Hitting out at Shah, who earlier in the day said Congress was playing along Pakistan on the issue, Sibal asked, "Now will leaders who have spent time in jails and are murder- accused tell us that our foundations are faulty and are questioning Rahul Gandhi's lineage?"

"We did not know that BJP will stoop so low that its President will speak like this by terming as faulty those who got freedom for the country," he said, adding that those accused in various cases are giving lectures and this government has no experience in making even statements.

"I would want that the Prime Minister should tell his party chief that such statements are not good in a democracy. But how will Modiji say this as he is himself helpless and is benefitting from this," he said.

"Stop this 'poster-baazi'. Stop doing politics on the Army's successes," Sibal told the BJP, adding that if they did so questions will be raised.

"Let the Army do its job, why is the government playing politics over the Army," he said hitting out at Shah.

Coming out in defence of the Congress Vice President for his "dalali" remarks against Modi, Sibal said, "Rahul Gandhi knew what he said. His thought process was clear. You should understand the feeling of Rahul Gandhi when he made the statement, which the people of the country do."

Asked why there was a contradiction in the stands taken by the party by earlier supporting Modi for the Army's act and later criticising him, he said, "When the first statement was made, it was to stand with the forces of this country, just as Sonia Gandhi stood with Atal Bihari Vajpayee."

Taking on the BJP chief for claiming that it was for the first time that the Army had crossed the LoC, Sibal said they seem to have forgotten the 1965, 1971 and Kargil wars.

"BJP should apologise to the nation for demeaning the Armed Forces," he said.

The Congress leader also recalled a 2013 order of the Election Commission cautioning various political parties to exercise caution while making references to the armed forces in their political campaigns so as not to politicise them.

Sibal further accused BJP of giving birth to Jaish-e- Mohammed as it was during its earlier regime that its chief Maulana Masood Azhar was released by the then Defence Minister Jaswant Singh.