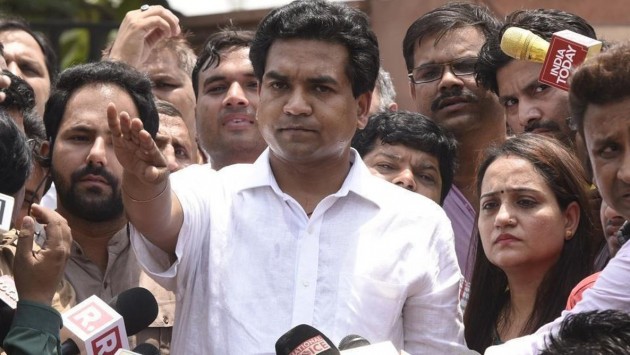 "I am releasing an open letter to Kejriwal. I am going to file FIRs against the person from whom I have learnt to fight against corruption and to take a stand for the truth. He used to be my 'guru' and today I am fighting against him. This is very painful for me but I can't keep quiet. From whom I have learnt these things, today I want his blessings for the victory in this war against corruption. I will file an FIR against you and I am apologizing for the same," Mishra said.

He further said that he was sacked from the state cabinet minister post because he wrote a letter to the Anti Corruption Bureau (ACB).

"If I had not written a letter to the ACB, then he would have not sacked me as the state cabinet minister. I have many evidences against Kejriwal. I know Kejriwal will try to give clarification on all the allegations made by me in the Delhi Assembly today and also brand me as a liar and a corrupt. I know his every tactics," he added.

"I am all alone in this fight and ready to sacrifice everything. But I would like to say that if you have a morality then accept my challenge and contest elections from either of our seats. Do you have the courage to face the people's mandate? If you have a fear of losing seat then contest the election without giving resignation. I am waiting for your reply," he said in a clear message to Kejriwal.

Venting out his ire against Kejriwal on social media, Mishra in a series of tweet had said that he would lodge multiple FIRs against him in different cases.

Taking to Twitter, the AAP MLA said that he would file the first FIR in connection with cash deal between Delhi Health Minister Satyendar Jain and Kejriwal, while the second one would be on illegal land deals between the duo.

Responding to Kejriwal's tweets where he claimed that truth would win and everything would be clarified in the Delhi Assembly special session, Mishra said that he have to face the probe.

Earlier, the Political Affairs Committee (PAC) of the AAP suspended Mishra from the party's primary membership.