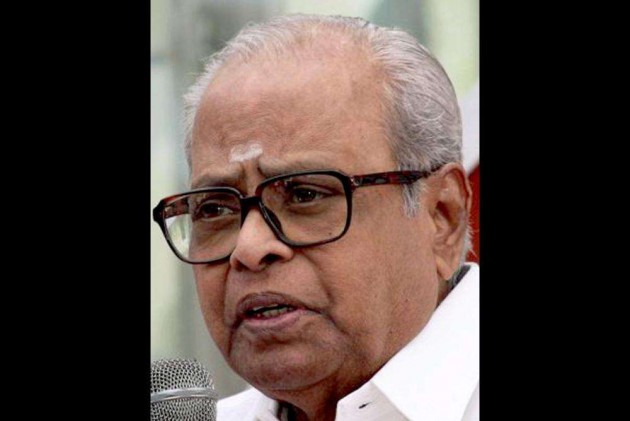 The 84-year-old Dadasaheb Phalke award winner, who carved out a niche for himself on the national stage with memorable films like Arangetram, Aval Oru Thodarkadhai, Rajini and Haasan-starrer Apoorva Raagangal, Avargal, Ek Duje Ke Liye and Aaina, died of heart attack following a brief illness.

Popularly known as KB, Kailasam Balachander broke away from the staple Tamil films of that time in the early '70s by championing bold themes and the cause of women and downtrodden in his films and was a trend-setter.

He often courted controversies, the early one of which was portrayal of a Brahmin girl as a prostitute that shook the community to which he belonged.

Hailed as "Iyakunar Sigaram" (peak among directors), Balachander stood out for experimenting with new faces like Saritha, Sujatha, Mohan, Prakash Raj, comedian Vivek and character artiste Nazar. A tough taskmaster, he brought out the best from his actors.

"He suffered a heart attack by 6.45 pm and he succumbed to it. His infection too had intensified. Though the fever was under control there was little that we could do given his age," a hospital spokesperson said.

Balachander made his debut in cinema with Tamil film Neerkumizhi, based on his play in 1965. Late comedian Nagesh had portrayed the poignant role of a cancer patient in the film.

His Sindhu Bhairavi was a brilliant portrayal of a yearning for intellectual companionship by the protagonist and the intricate relationship problems that came with it.

Born on July 9, 1930 at Nannilam in the then composite Thanjavur District (now Thiruvarur), Balachander directed films in Tamil, Telugu, Kannada and Hindi. He wrote, directed and produced more than 100 films in his long career, launching more than 65 actors, actresses and technicians in the Tamil film industry.

His blockbuster movies include Aval Oru Thodarkathai, (Tamil) which was remade as Anthulaney Katha in Telugu, Maro Charitra (Telugu) remade as Ek Dhuje Ke Liye in Hindi, and Thillu Mullu (remake of Golmaal in Hindi).

"My father touched so many hearts and lives though his films. He inspired the common man. His passing away is a terrible loss not only to our family but also to the entire film industry," Pushpa Kandasamy, daughter of the filmmaker, told PTI.

The funeral will take place on December 25. The body will be kept at their residence on Warren Road in Mylapore here for people to pay homage, she said.

Balachander is survived by wife, son and daughter. His other son, Kailasam died on August 15 this year.

He was surrounded by his family member at the time of his death, Puspha said.

Beginning his life as a teacher, he became a superintendent in the Accountant General's office, and entered Tamil filmdom by writing dialogue for MGR's movie Dheiva Thaai.

Even while working in the AG's office, he staged several dramas. His successful play Server Sundaram was later made into a Tamil film (1964) and was directed by Krishnan Panju and produced by AVM.

Kavithalaya, and Min Bimbangal were his production houses that made films and television shows respectively.

When satellite television came to occupy a sizable entertainment space among audience in early 1990s, he was quick to recognise its importance. He produced several television mega serials including Rail Sneham and Kai Alavu Manasu.

Recently, he acted in Rettaisuzhi which was produced by film director Shankar.

"It is unfortunate that he passed away without seeing the transformed city of his dreams," Naidu said in a message.

Balachander's Maro Charitra (Ek Duje Ke Liye in Hindi) has been one of the finest films in Telugu, Naidu said.

Chandrasekhar Rao said Balachander is among the directors who set high standards in southern films.

Chowdary, Union Minister of State for Science and Technology, hailed Balachander's contribution to the film industry.

Jayalalithaa paid rich tributes to the late director, and said he had dwelt on subjects concerning women and their travails and tribulations.

Describing him as a simple and affable man, she recalled his transition from theatre to the silverscreen. He presented relationships and human feelings in a different form and was a recipient of a number of honours including the prestigious Dadasaheb Phalkje Award, she said in a statement here.

"Balachander's death is an irreparable loss to the film world and none can fill the void left behind him," the former chief minister, a former actor herself, said extending her sympathies with his family and praying for his soul to rest in peace.

Karunanidhi tweeted that Balachander's fame would grow till the film industry lived and credited him with creating new 'twists' in Tamil cinema.