JNU Row: SC to Hear Petition for Action Against Lawyers on Feb 26 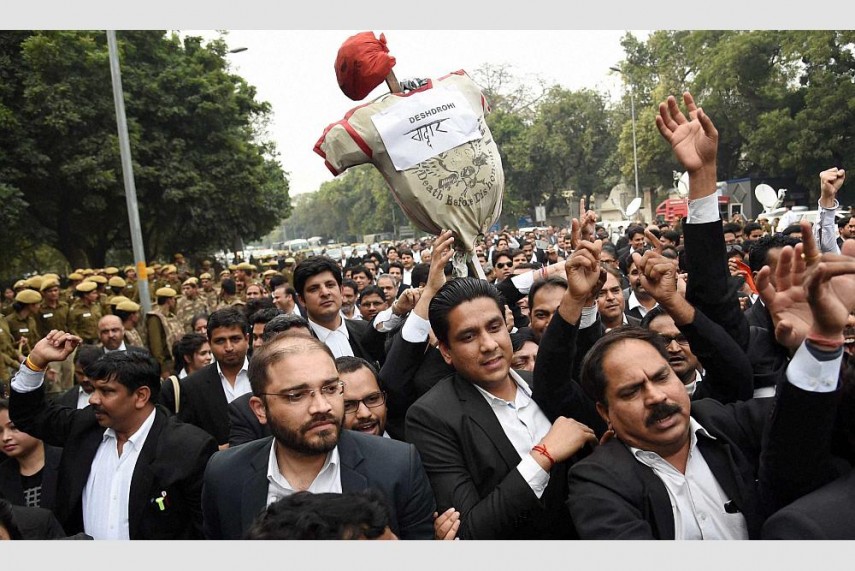 The Supreme Court today agreed to hear tomorrow a plea seeking contempt action against three lawyers who were allegedly caught on camera "bragging and boasting" that they had beaten up JNUSU President Kanhaiya Kumar and others, including journalists, in a court complex.

"Let it be listed tomorrow before the bench concerned," a bench comprising Chief Justice T S Thakur and Justice U U Lalit said when lawyer Prashant Bhushan sought urgent hearing of the matter filed by another advocate Kamini Jaiswal on the issue.

Bhushan said that a bench headed by Justice Chelameswar had fixed another pending matter on JNU issue for hearing on March 10 and the instant plea needed to be heard urgently.

The plea, which was yesterday filed in the apex court, also sought a direction to set up a Special Investigation Team to probe the incidents of violent attacks on some journalists, students, teachers, defence lawyers and Kanhaiya on February 15 and 17 by some advocates in the premises of Patiala House courts here during the hearing of the sedition case involving the JNUSU leader.

The plea was filed in pursuance of an oral observation by a bench headed by Justice J Chelameswar, which is hearing the matters arising out of violence in the trial court premises in the JNU case, that the allegations are fresh ones and hence, a fresh petition is required to be filed.

It has sought "suo motu contempt proceeding" against lawyers Vikram Singh Chauhan, Yashpal Singh and Om Sharma on the ground that they have allegedly been caught on camera talking about the attacks.

It alleged that the lawyers have interfered in the "administration of justice" and willfully violated the orders passed by the apex court on February 17.

The petition which also makes Ministry of Home Affairs and Delhi Police as parties, has said facts have come to light that there was "blatant violation of the rule of law" in the trial court premises.

It has alleged that contempt of court has been committed by certain lawyers, including these three, and there was complete inaction on the part of Delhi Police "which has been exposed by the report dated February 18, of 5 senior advocates appointed as court commissioners by this court".

The plea has also referred to the report of the National Human Rights Commission as well the sting operation of a news channel on the issue.

The apex court had on February 23 agreed to consider a plea seeking contempt action against the three lawyers after it was mentioned by lawyer Prashant Bhushan before the bench.

"This bragging and boasting by the lawyers are trampling the rule of law. It's high time that the Supreme Court takes suo motu notice of the matter and issues contempt notice against these lawyers," Bhushan had said.

Continue FREE with Ads Pay Rs. 1 to Read Without Ads
READ MORE IN:
National
Next Story : BJP Will Form Next Govt in UP After Assembly Polls: Shah
Download the Outlook ​Magazines App. Six magazines, wherever you go! Play Store and App Store