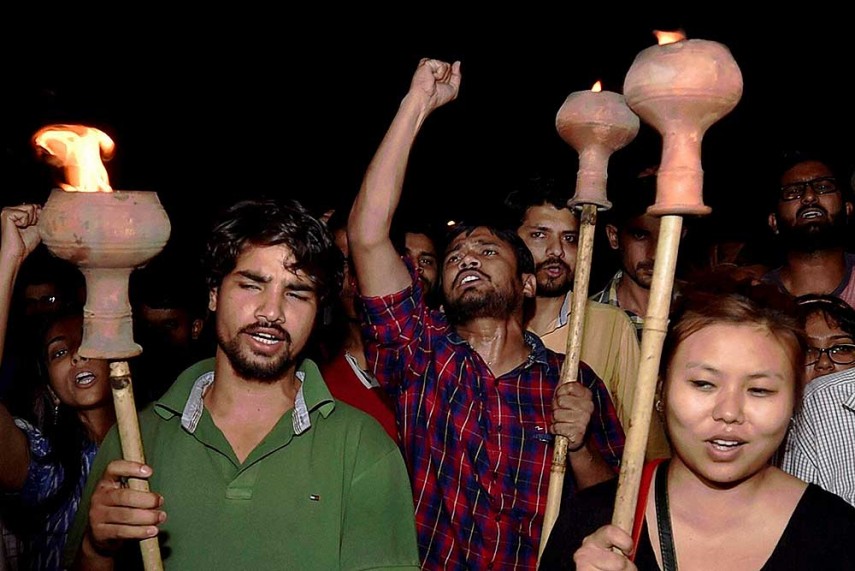 Delhi High Court today declined the plea of two private individuals to cancel the interim bail of JNUSU president Kanhaiya Kumar in a sedition case, saying nothing has been brought before it to show that the student leader had made any anti-national speech after his release.

Justice P S Teji dismissed the pleas saying, "no hindrance or obstruction" in the ongoing investigation in the case by the accused has been brought to the notice of the court by any party.

The high court further said it is for the investigating officer (IO) to decide whether or not to seek cancellation of bail on grounds of materials collected during investigation as the legal provision does not envisage any right upon a stranger to approach the court for cancelling bail.

Such a right which has been conferred only on IO or under exceptional circumstances, it said.

The court refused to accept the petitioners' contention that Kanhaiya has made any anti-national speech post bail.

"Nothing has been brought forth to establish that such speeches were actually made or that the same were declared anti-national by any court of law," the judge said, adding that the investigating agency has also submitted that "bail need not be cancelled".

The court said, "A stranger plea cannot be entertained without any substantial set of facts and circumstances or without sound principle of law to call upon the accused, for cancellation of bail, who has been protected under Article 21 of the Constitution of India except the authority empowered under the CrPC [section 439(2)]."

"This court is of the considered opinion that much time has already been spent on the application (for cancellation of bail). It will be appropriate if the IO submits his report within six months from the date of grant of bail for consideration of the court," it said.

The High Court had earlier reserved its order on the plea for cancellation of interim bail to Kanhaiya, a matter in which the Delhi Police faced the ire of the court for not taking an unequivocal stand.

The judge had asked the police to take a specific stand on whether it wants Kanhaiya's bail to be cancelled or not.

However, after it was pulled up by the court which made hard hitting remarks like "Why are you playing with the court" and "police has made a mockerey of the system," Delhi Police said it was not in favour of cancellation of the Kanhaiya's bail.

The petitioners -- Prashant Kumar Umrao and Vineet Jindal -- who have sought cancellation of the student leader's bail on the ground that his speech post release was "anti-national" and violated the bail conditions, argued that the accused "continued his anti-national activities on each and every day" and cited his remarks against Indian armed forces in Kashmir.

Kanhaiya, who was granted interim bail on March 2 by the high court, is facing sedition charge in connection with an event at JNU on February 9 where anti-national slogans were allegedly raised and Parliament attack convict Afzal Guru was hailed as a 'martyr'.

During the arguments, advocate R P Luthra, appearing for Umrao, alleged that Kanhiya "wilfully and deliberately" violated the conditions imposed by the court and the undertaking given by him.

The high court while granting bail to Kanhaiya had said he will not participate actively or passively in any activity which may be termed as anti-national, Luthra said.

The police had said in its reply that Kanhaiya failed to adhere to "letter and spirit" of the bail order by making derogatory remarks against the Army in Kashmir and he "misused his liberty".

"The spirit of the order while granting bail was an expectation from a student to come back to the mainstream and remain a student. However, as is evident, the respondent did not adhere to the letter and spirit of the order passed by high court. Speeches placed before the court are self explanatory," the police had said.

Continue FREE with Ads Pay Rs. 1 to Read Without Ads
READ MORE IN:
Kanhaiya Kumar Society
Next Story : Whatever I Say Will Be Problematic: Rajan on Modi
Download the Outlook ​Magazines App. Six magazines, wherever you go! Play Store and App Store