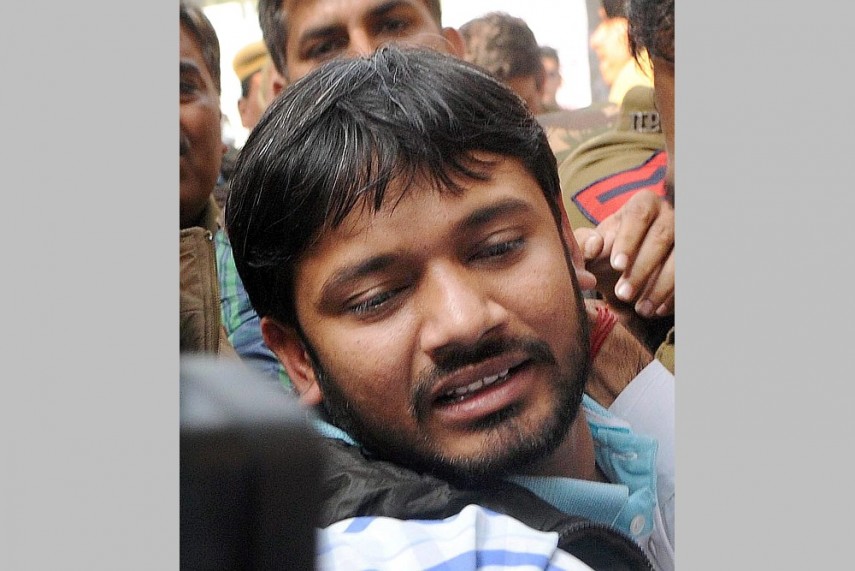 Delhi Police today told the Delhi High Court that further custodial interrogation of JNUSU President Kanhaiya Kumar is required in the wake of the arrest of two other accused students Umar Khalid and Anirban Bhattacharya in the sedition case.

As soon as the hearing on Kanhaiya's bail plea commenced before Justice Pratibha Rani, Additional Solicitor General (ASG) Tushar Mehta told the court that police have a statutory right to take police custody of an accused for 15 days and due to new developments Kanhaiya's custodial remand is necessary.

"After yesterday's development, two of the accused have surrendered and are in safe custody. Their remand is yet to be taken. In the backdrop of the new development and as per our statutory right of 15 days police custody of an accused, we will be seeking remand of Kanhaiya Kumar to confront him with Umar Khalid and Anirban Bhattacharya," Mehta submitted.

The ASG said, "Our right cannot be curtailed and the present bail petition be deferred."

However, during the hearing, when the court was informed about violence at Patiala House court complex during Kanhaiya's remand proceedings, the bench observed, "We have to ensure that no one suffers even a scratch this time. The Registrar of the Delhi High Court and the police should ensure that no ruckus, as happened in the past, should take place while the accused are being produced."

Then Mehta told the court to defer the bail petition in wake of the new development.

The bench has now fixed February 29 for further hearing on the bail plea.

Senior advocate Kapil Sibal, appearing for Kanhaiya, contended that as per the status report filed by Delhi Police, in pursuance to the court's direction yesterday, there was no evidence of any anti-India slogans being raised by his client.

"I would like to tell the court that in the light of the status report filed by the police, there is no evidence of anti-India slogans raised by Kanhaiya. So he should be granted bail," Sibal said.

Mehta, however, said that as per the new circumstances and evidence which have emerged, Kanhaiya is required to be confronted with the two arrested accused.

Kanhaiya, who was arrested on February 12, was in police custody till February 17 when he was remanded in judicial custody till March 2 amidst violence at the court premises during the remand proceedings.

During the proceedings, the bench said this time only the counsel for the accused, the lawyers representing the investigating agency and police officials will remain present in the court room during the remand proceedings which have to be done secretly so that no untoward incident takes place.

The Delhi government's senior standing counsel Rahul Mehra told the bench that he should also be heard in this matter.

The bench, however, observed, "This inside fight should not be carried on. Let the court proceed with the matter."

Mehra had said that he has been appointed as senior standing counsel by the full court reference of the high court and if there was no notification empowering the ASGs to appear in the matter, they cannot represent the State.

Besides Mehta, Jain and Soni, another Special Public Prosecutor of Delhi Police Shailendra Babbar appeared before the court today.

During the day's proceedings, when ASG Mehta told the court that police has a statutory right to take 15 days police custody of an accused, the bench said, "You have the statutory right and no one can deny this."

At this juncture, Sibal contended that police had themselves sought to send Kanhaiya in judicial custody before the trial court.

"How can they seek fresh police custody. However, if they are going to do so permit us to oppose the remand and keep this bail plea pending subject to the outcome of the trial court's decision as to whether Kanhaiya will be remanded in police custody or judicial custody," he said.

Sibal also appealed to the court that he should be informed in advance about the content of the remand application so that he can oppose it, saying that it was his statutory right.

To this, Justice Rani said, "I will ask them to inform you in advance about such application. This right cannot be denied."

She said, "You (police) will have to perform this religiously. I don't want to hear anything in future that you have not followed the order of this court. It has to be followed in black and white."

When the bench said it will hear Kanhaiya's bail plea on February 29 at 2:15 PM, some of the office bearers of the Delhi High Court Bar Association, who were present in the court room, said that in the post-lunch session there might be a security issue as most of the lawyers are free by then.

Rahul Mehra, however, said that police should ensure safety and security and even the lawyers should not indulge in such kind of activity which was witnessed at the Patiala House court premises.

Sibal told the bench that he should also be allowed inside the court room during the remand proceedings of Kanhaiya.

"If the police will pray for your remand, the you will be there. The remand proceedings should be done secretly. How it will be conducted, I will discuss with the police and lawyers of the accused in my chamber and will pass an order accordingly," it said.

At this stage, Mehta assured the bench that police will comply with the court's direction and will ensure safety and security of the accused.

"It is the requirement of the law that the proceedings should be conducted in a peaceful manner," the court said.

In pursuance ot the court's direction yesterday, Delhi Police filed a status report of its investigation in the sedition case.

In its status report, police have said that besides the video footage in which the accused are allegedly raising anti-india slogans, they have other evidence against Kanhaiya as well.

In the status report, police opposed Kanhaiya's bail plea, saying if released at this stage, he may influence witnesses as the investigation is at an initial stage and statements of witnesses are being recorded.

It said that problem may arise with regard to law and order situation if the accused is granted bail.

Besides these, the police mentioned 30 anti-India slogans which were allegedly raised by the accused and said that these slogans were against the country.

Delhi Police Commissioner B S Bassi, who had last week said that police would not object if Kanhaiya applied for bail, had yesterday justified changing its stand of opposing the bail plea in the high court, saying the circumstances have changed.

Bassi had said Kanhaiya showed repentance on his part when he issued an appeal on the day he was produced before a court but later denied having issued any such appeal and made certain allegations which were "false".

"We have reasonable apprehension that if he (Kanhaiya) comes out on bail, he is bound to impact the investigation and influence witnesses. He is also likely to indulge in activities that are violative of penal laws. That is why we have opposed grant of bail to Kanhaiya and shall oppose it further too," Bassi had said.

The high court had yesterday posted the matter for today while asking the police to submit a status report of the probe in the case limited to the extent of bail only.

Kanhaiya had moved his bail plea in the high court following a direction of the Supreme Court which had refused to hear it, saying it will set a "dangerous precedent".

In his petition, Kanhaiya has claimed he was "falsely implicated" and he had not raised any anti-national slogan.

The JNUSU leader has claimed that he was wrongly arrested on the basis of an FIR which was devoid of evidence to book him under such a serious charge.

He has said that no case is made out against him as there is no evidence as he had never raised any anti-national slogan during the event organised in JNU on February 9.

Kanhaiya had approached the SC directly for bail claiming threat to his life in Tihar Jail.

Continue FREE with Ads Pay Rs. 1 to Read Without Ads
READ MORE IN:
Kanhaiya Kumar National
Next Story : Govt Will Not Let Me Speak Because They are Scared: Rahul
Download the Outlook ​Magazines App. Six magazines, wherever you go! Play Store and App Store