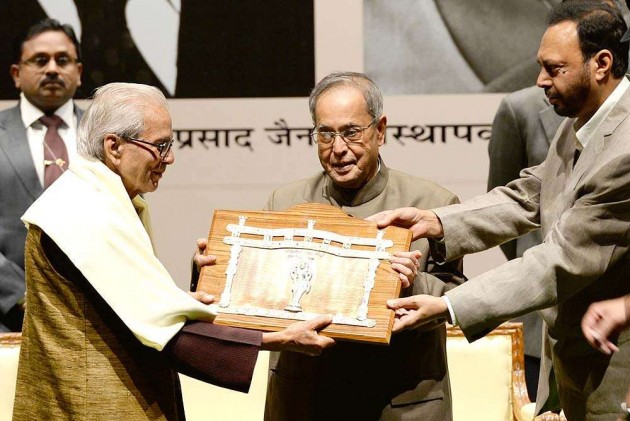 "Kedarnath Singh, through his poetry, has offered us a rare assimilation of rhymes and lyrical prose, exploring both the realms of reality and fantasy with equal felicity. His poetry presents a collage of meaning, colours and acceptance.

"A poet of unique stature, his approach is not only sensitive to modern aesthetics but also to traditional rural communities while at all times being committed to the celebration called life," Mukherjee said.

Singh is a celebrated teacher as well who has taught at Jawaharlal Nehru University (JNU) here.

Speaking on the occasion, the President said he wished that the younger generation delve deep into Indian classics.

"This will not only help in resetting the moral compass but would also go a long way in contributing to our efforts at nation building," he said conferring the 49th Jnanpith award to Singh at a function in Balyogi Auditorium, Parliament Library Building.

The Jnanpith award, was institutionalised by philanthropist couple Sahu Shanti Prasad Jain and Late Rama Jain, to recognise and award Indian authors for their contribution to Indian literature.