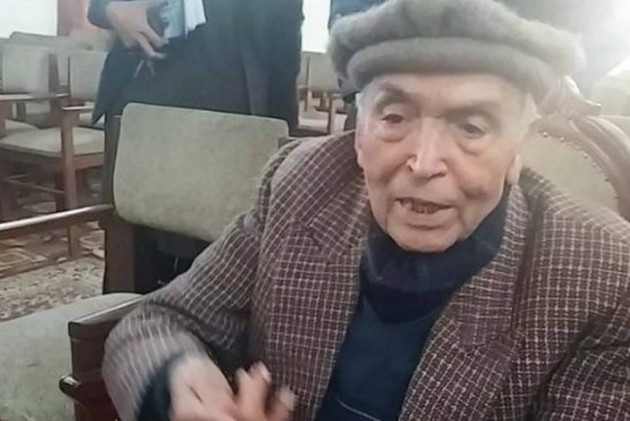 Amanullah Khan, one of the founders of the Jammu Kashmir Liberation Front that led a violent campaign for independent Kashmir, including the killing of an Indian diplomat in the UK in the mid-80s and hijacking of an Indian Airlines plane to Lahore, died today in Pakistan, which he made his home for three decades.

Khan, 80, died in a hospital in the garrison city of Rawalpindi after suffering health complications linked to a lung disease. He was hospitalised about three weeks ago.

A prominent Kashmiri leader, who was based in London before being deported to Pakistan in 1986, Khan was believed to have been the mastermind in the killing of Ravindra Mhatre, the number two in the Indian Consulate in Birmingham in 1984.

Mhatre was abducted and killed in an attempt to secure the release from prison of the group's founder Maqbool Bhat who was hanged to death in 1984 in Tihar jail.

In 1971, Bhat was accused of masterminding the hijacking of a passenger Airline to Lahore and the hijackers declared affiliation with JKLF under the leadership of Bhat. After arrest and release in Pakistan, Bhat sneaked into India where he was soon captured.

Though Khan had set up JKLF in 1977, he was relegated to the background after militant groups established their dominance in Kashmir with a bloody campaign that began in the late 80s

His funeral prayer will be offered tomorrow in the historic Liaquat Bagh park of Rawalpindi. It is not clear where he will be buried.

Khan is survived by his only daughter Asma, who is married to a Kashmiri separatist leader Sajjad Ghani Lone.

So far his death has not been reported widely in the local media. There is also conspicuous silence as far as condolence messages on such occasion by Pakistani politicians are concerned.

It could be due to the fact that Khan was believed to be not in the good books of Pakistan for his refusal to follow the official policy on Kashmir.

Meanwhile, the Pakistan government tonight condoled the demise of Khan, saying his death is an "immense loss to the Kashmiris' cause."

"We are deeply saddened and grieved at the demise of veteran Kashmiri leader Amanullah Khan. His death is an immense loss to the Kashmiris' cause of realisation of their right to self-determination in accordance with the UN Security Council resolutions on Kashmir," the government said in a statement.