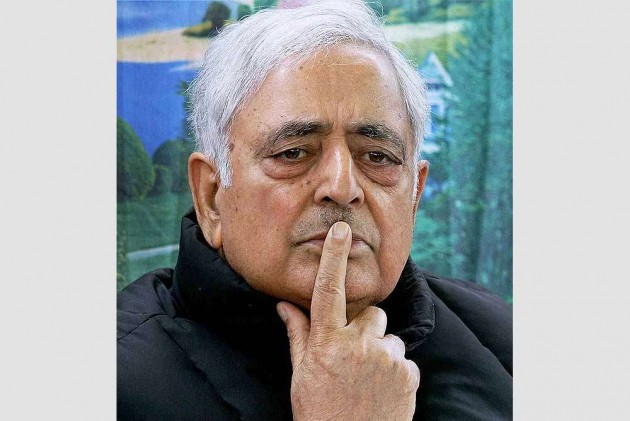 Jammu and Kashmir has been put under Governor's Rule for the seventh time since Independence and, ironically, Mufti Mohammad Sayeed was an important player on all the occasions which led to the imposition of Central rule in the state.

Sayeed's death was the cause for the latest promulgation of the Governor Rule, which was imposed seventh time yesterday after allies-- PDP and BJP-- deferred the government formation process till the end of the four-day mourning period.

The PDP parton died at AIIMS hospital in Delhi on Thursday.

Invoking Section 92 of the Constitution of Jammu and Kashmir, Governor N N Vohra yesterday promulgated Governor's Rule in the state with effect from January 8 after approval by President Pranab Mukherjee.

It was also the seventh time Governor's Rule has been promulgated in the state since Independence, the first being in March 1977.

Ironically, Sayeed was an important player in the political developments of the state on all seven occasions.

Governor's Rule was imposed in the state on March 26, 1977 after state Congress -- then headed by Sayeed -- withdrew support to the minority government of Sheikh Mohammad Abdullah of National Conference.

Sheikh has come to the power following an accord with then Prime Minister Indira Gandhi in 1975.

The Governor's Rule lasted for 105 days and ended as the National Conference founder returned to power with a thumping majority in the Assembly polls.

Shah became the Chief Minister after he led a rebellion with National Conference against his brother-in-law and then incumbent Chief Minister Farooq Abdullah in 1984.

This 246-day spell ended after Abdullah entered into an accord of his own with then Prime Minister Rajiv Gandhi.

The third time Governor's Rule was imposed in January 1990 when Farooq Abdullah resigned as the Chief Minister over the appointment of Jagmohan Malhotra as the state Governor following eruption of militancy in the state.

Sayeed was the Union Home Minister at that time and had brushed aside Abdullah's opposition to Mahotra's appointment.

This was the longest spell of Governor's Rule -- six years and 264 days -- which ended in October 1996 after National Conference returned to power in Assembly elections held after a gap of nine and half years.

Six years later, Governor's Rule was again imposed in the state as the 2002 Assembly polls threw up a hung assembly with no party in a position to form a government on its own.

Sayeed, whose regional PDP had won 16 seats, negotiated an alliance with the Congress and dozen-odd independents to form the government, ending the 15-day Governor's Rule.

In 2008, Governor's Rule was again imposed after Sayeed's PDP pulled out of the Congress-led coalition government led by Ghulam Nabi Azad in June following massive protests across the state for and against the allotment of land to Shri Amarnath Shrine Board.

The Assembly elections were held later that year and National Conference and Congress formed a coalition government in January 2009, ending 178 days of Governor's Rule.

As the 2014 Assembly elections again threw up a hung verdict, Sayeed -- whose PDP emerged as the single largest party -- took over two months to stitch an alliance, this time with BJP, necessitating Governor's RUle again.

The 51-day direct Central rule ended on March 1, when Sayeed was sworn in as the Chief Minister.

This is the third time that Governor's Rule has been imposed in the state for various reasons since Vohra entered the state Rajbhawan in 2008.

Commenting on the development, former Jammu and Kashmir Chief Minister Omar Abdullah said imposition of Governor's Rule during Vohra's tenure "must be a record".

"For the 3rd time Gov(ernor) Vohra takes over the reigns of J&K. This must be a record in itself," Omar wrote on Twitter last night.