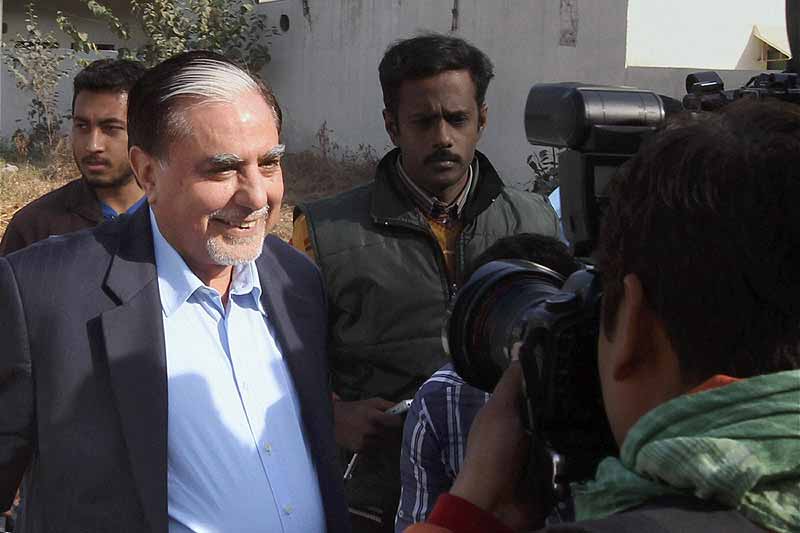 Zee Group Chairman Subhash Chandra and his son were today questioned for over seven hours by Delhi Police which confronted them with two arrested Editors in connection with the alleged Rs 100 crore extortion bid from Congress MP Naveen Jindal's company.

Chandra arrived at the Crime Branch office in Chanakyapuri at 2 pm while son Puneet Goenka reached there at 2:30 pm along with their lawyers. The questioning went on till late in the night.

Zee editors Sudhir Chaudhury and Samir Ahluwalia were brought to the crime branch office while Chandra and his son were being questioned.

Chandra had secured a interim protection from arrest till December 14 by a Delhi court. Chaudhury and Ahluwalia were remanded in police custody for two days by a Delhi court today.

Chandra's questioning came following police sending three notices to him asking him to join investigations in the case in which Chaudhury and Ahluwalia were arrested late last month following investigations into complaint filed on October two.

Investigators have told a local court earlier that they were treating Chandra as an accused as he knew about the dealings between his employees and Jindal's company.

Zee Group has denied the allegations of extortion and demanded the immediate release of its two senior journalists, alleging the police action was "illegal" and "designed for something else".

In a statement, Zee Group said both Chandra and Puneet extended fullest cooperation to Delhi Police so that truth emerges.

"We expect justice and fair inquiry. The fullest cooperation ended attempted misimpressions that Mr. Chandra and Mr. Goenka were avoiding joining the investigations," it said.

"Now that Mr. Chandra and Mr. Goenka have joined the investigations, police have no ground to oppose the bail of the two editors," Zee News Ltd.'s counsel Vijay Aggarwal said.

During questioning, sources said Chandra and Puneet denied the allegations and claimed it was an attempt to scuttle news reports on coalgate scam.

Chandra was asked whether Alhuwalia telephoned him and informed him about the discussions with Jindal company.

Police had claimed that they had phone records to show that Alhluwalia spoke with chandra for nearly three minutes explaining about the discussions.

In a letter to Delhi Police through his lawyer R K Handoo, the Zee Group Chairman had claimed "vested interests" have created a public "mis-impression" that he is deliberately not joining investigations.

Terming the campaign as "vicious", "malafide" and "unwarranted", the letter said Chandra had informed the police on November 27 that he went ahead with his "pre-scheduled" meetings and engagements in India and abroad.

While granting interim relief from arrest, the court had directed Chandra and his son to "join and cooperate" with the probe. It had ordered both of them to surrender their passport with the police.