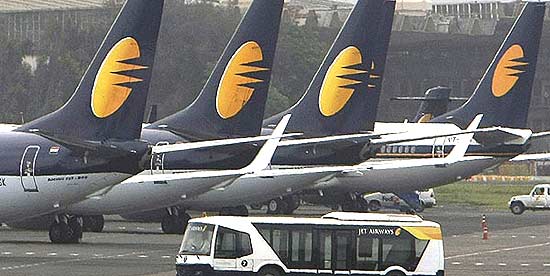 In the first ever investment by a foreign airline in an Indian carrier, Jet Airways today announced plans to sell 24 per cent equity to Etihad Airways for about Rs 2,058 crore, as part of a strategic alliance that would lead to a major expansion in their global network.

Bringing curtains down on almost six months of tough negotiations, top officials including Jet promoter Naresh Goyal and Etihad President and CEO James Hogan, announced the strategic equity alliance in Abu Dhabi under which the Indian private carrier would sell 27.26 million shares in a preferential offer to Etihad at Rs 754.74 a piece.

"The value of this equity investment is USD 379 million (about Rs 2,058 crore) and will result in Etihad Airways holding 24 per cent of the enlarged share capital of Jet Airways," a joint statement by the two airlines said.

"Substantial ownership and effective control will remain with Indian nationals, with Goyal as non-executive Chairman holding 51 per cent of the company," the statement said.

This is the first investment by a foreign carrier in an Indian airline since the government changed the FDI policy in aviation last September to allow foreign carriers to pick up stake in their Indian counterparts.

The two airlines claimed that the alliance would result in their combined global network to cover over 140 destinations and provide direct foreign connectivity to Indian passengers from 23 metro and non-metro cities.

Jet would establish a Gulf gateway for its flights to the US, Europe, Africa and the Middle East, apart from enhancing services from its primary hubs of Delhi and Mumbai and introducing new flights from Hyderabad and Bangalore.

Under the deal, Jet and Etihad would explore joint purchasing opportunities for fuel, spare parts, equipment and catering supplies, as well as external services like insurance and technology support.

This would be a major cost-saver for Jet which has been reeling under high fuel costs.

Other areas of co-operation would include joint training of pilots, cabin crew and engineers and maintenance of common aircraft types, the statement said, adding that a joint project management office would be set up to ensure delivery of all synergy benefits to both parties.

Goyal, who was earlier bitterly opposed to opening up of FDI participation for foreign airlines, was the first to move immediately after the government allowed international carriers to pick up a maximum of 49 per cent stake in domestic airlines last September.

Jet is likely to hold an Extraordinary General Meeting of its shareholders a month later to induct new members, including those from Etihad, on its Board.