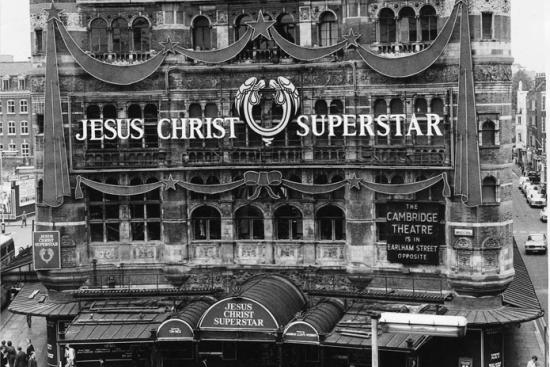 Print
A
A
A
increase text size
Outlook April 12, 2015 12:12 IST Jesus Christ Superstar to Be Staged in Kerala After SC Lifts Ban

Twenty-five years after it was banned, the famous Rock opera 'Jesus Christ, Superstar', is free to be staged now in Kerala with the Supreme Court recently lifting the ban by the state government.

An elated Father Abraham Vellathadathil of Kottayam, who challenged the ban in the Kerala High Court and apex court, says his fight was against 'injustice and discrimination'.

"I went to the Supreme Court as it was an injustice, insult and discrimination against the people of Kottayam. The whole thing was exercised by a public authority to satisfy personal grievance and vendetta against social activist Mary Roy," Father Abraham, a priest in CSI church in Kottayam dioceses, told PTI.

Alphons Kannamthanam, former IAS officer and then Kottayam Collector and presently BJP National Executive committee member, had ordered the ban on October 15, 1990 at 5.05 PM just as the play was to be staged by students of Mary Roy's School at Kottayam, who were all dressed up to play their part.

Mary Roy also challenged the ban in the High Court in 1991 which dismissed her plea following which she took her fight to the Supreme Court, which granted her special permission to stage it exclusively for the school and also directed the Collector to provide the school police protection, Father Abraham, former Principal of Henry Baker college, Melukavu, Idukki, said.

"There was no law and order problem. It was masterminded by few priests who were seeking political favours," he alleged.

Fr.Abraham said his legal battle was not to get the play staged, but against the injustice and discrimination brought to the people. "I was against the abuse of public authority to satisfy his vendetta for that he masterminded a religious protest with the help of few priests", he alleged.

"Ideas should be met with ideas, not with rods and clubs. I have the right to give impression to my faith, just as they have the right. This is only an ideological debate and if they have objection, it should be discussed'.

The bench of the apex Court, headed by Justice Ranjan Gogoi had on Tuesday last quashed the 1990 notification banning the staging of the musical in Kottayam after it was informed that the drama was staged several times abroad and was also available online.

Asked if staging of the play would have hurt Christian sentiments, the Priest said it was staged in many places in India, and even in the Vatican. "Why was it only offensive to the people of the state?," he asked.

The music for the 1970s rock opera, composed by Andrew Lloyd Webber with lyrics being penned by Tim Rice, had been staged in Chennai, Delhi, Kolkata and even the Vatican.

Father Abraham moved the High Court in 2002 to lift the ban and moved the apex court in 2004 after the petition was dismissed.

A division bench of Kerala High Court had dismissed the petition on the ground that another division bench had earlier dismissed an appeal filed under provisions of the Kerala Dramatic Performance Act against the Collector's order.

The High Court had in 1991 observed that a perusal of the script would show that it was against the fundamental belief of Christian faith and the presentation of Jesus Christ in the play was "both sacrilegious and blasphemous, which would outrage the religious feelings of Christians".

According to the petitioner, the rock opera was a 'literary piece staged and enjoyed by Christians everywhere, including in the Vatican'.

The opera tells the story of the last seven days in the life of Jesus on Earth, depicting the events that occurred in 33 AD as set out in the Holy Bible when Jesus was betrayed, arrested, beaten, by even his closest followers.

It depicts the agony of Jesus during his betrayal, his trial, his condemnation by the high priests and the Roman Governor and finally the death to which they sentenced him.

Continue FREE with Ads Pay Rs. 1 to Read Without Ads
READ MORE IN:
Arts & Entertainment
Next Story : When Nehru Was Requested to Start a New 'Era' Named After Gandhi
Download the Outlook ​Magazines App. Six magazines, wherever you go! Play Store and App Store