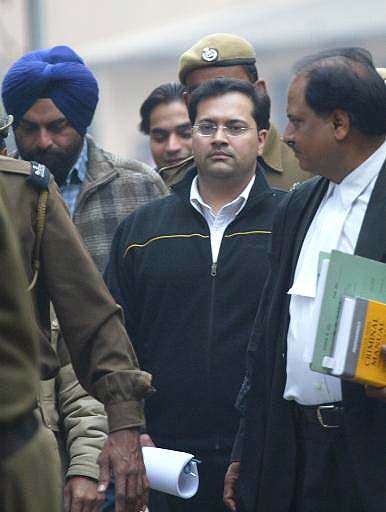 Justice Hima Kohli granted parole to Sharma from December 28 till January 5 next year after the police filed a status report informing about his examination in post-graduation in Human Rights which will commence from December 30.

Justice Kohli, however, made it clear that Sharma will appear in the examination centre in Delhi and not in Chandigarh.

The court also directed the Tihar authorities to do the needful for shifting of the examination centre.

Sharma's counsel told the court that jail authorities have given many certificates to his client acknowledging his good conduct.

He has taken care of 470 children of convicts by financing for their studies, the counsel said.

He said Sharma has not breached any condition laid down by the court earlier and added that this time also whatever condition the court will impose, he will abide by it.

Sharma, son of former Union Minister Venod Sharma, was sentenced to life imprisonment for killing Jessica Lall in 1999, and he had moved the high court seeking a month's parole to prepare for and appear in his second semester PG exams.

In his plea, he had said he has to "prepare master thesis, field report, study report, case study report and select a guide as required for completion of the post graduation course".

Claiming that on November 27, 2013 the Superintendent of Tihar jail had forwarded his application for grant of parole to the government, the convict said till date no order has been passed by the government and he is aggrieved by it.

Reversing the trial court's acquittal order, the Delhi High Court had awarded life sentence to him in December 2006 in the murder case and the Supreme Court had upheld the high court order against him in April 2010.