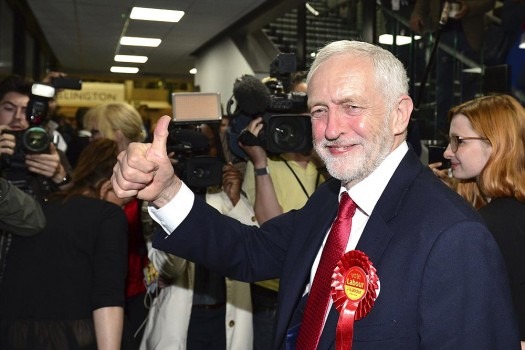 In a significant turnaround of fortunes, Britain's Opposition Labour party leader Jeremy Corbyn has edged past embattled Prime Minister Theresa May in popularity ratings for the UK's top job for the first time today, according to a new survey.

Prime Minister May seems to have taken a major hit with her snap general election gamble backfiring earlier this month and losing her a majority in Parliament, the survey claims.

The survey polls Corbyn at 35 per cent as a popular choice for Prime Minister with May on 34 per cent and nearly a third (30 per cent) saying they were unsure.

In the days before the general election vote on June 8, May was on 43 per cent on the question - "Who would be more capable as Prime Minister" - compared to Corbyn's 32 per cent, representing a major turnaround of fortunes for the two leaders, said the YouGov poll for 'The Times'.

A total of 1,670 people took part in the poll, which will come as a blow for May, who has been under fire after the Conservatives lost their parliamentary majority in the general election.

The Tories are now negotiating terms for a minority government via a non-binding agreement with Northern Ireland's Democratic Unionist Party (DUP), which is yet to be finalised.

Corbyn has repeatedly stated that his party was a "government in waiting".

May has also faced criticism over her response to the Grenfell Tower fire in London, which claimed at least 79 lives and displaced hundreds.

She is in Brussels this week for the first time since the disastrous general election and has been meeting European Union (EU) leaders to try and thrash out a positive Brexit deal.

She said that the 3 million EU citizens living in the UK should take "reassurance and confidence" from a proposal for a special "UK settled" status laid out at the European Council summit in Brussels yesterday.

The proposals, which are subject to reciprocal arrangements being guaranteed for UK citizens in the remaining 27 EU member states, have been given a cautious welcome by top Brussels figures.

"I want to reassure all those EU citizens who are in the UK, who have made their lives and homes in the UK, that no one will have to leave, we won't be seeing families split apart," May said.

"This is a fair and serious offer. I want to give those EU citizens in the UK certainty about the future of their lives, but I also want to see that certainty given to UK citizens who are living in the EU," she said.

European Commission President Jean-Claude Juncker welcomed it as a "first step, but not sufficient".