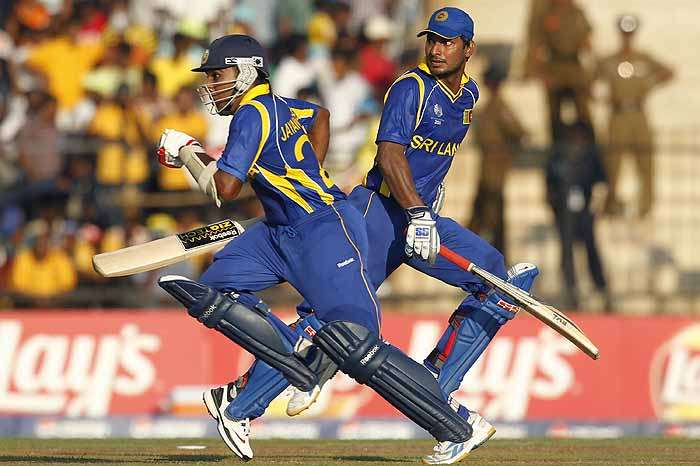 An innings of 94 from Mahela Jayawardene and 76 from Kumar Sangakkara helped Sri Lanka to reach 276 against New Zealand in the fourth one-day international at Nelson today.

The tourists were all out with three balls remaining in their innings after their last six wickets fell for only 31 runs.

Sangakkara, who ignited the Sri Lankan run rate after a slow start, became the third most prolific ODI batsman moving his career total to 13,490 runs.

In his 83-ball knock the classy left-hander overtook fellow Sri Lankan Sanath Jayasuriya (13,430) to sit 214 behind Australian Ricky Ponting on a list headed by Indian great Sachin Tendulkar who amassed 18,426 runs. Jayawardene is fifth on the all-time list with 12,472.

With the series locked 1-1 after the third match in Auckland was washed out on Saturday, Sri Lanka captain Angelo Mathews elected to bat first when he won the toss on an easy-paced wicket.

It brought Sangakkara to the crease to make an immediate impact on the game.

From being 11-1 after five overs, Sangakkara's first six scoring strokes were a single and five fours as Sri Lanka added 35 in the next five overs.

New Zealand skipper Brendon McCullum eventually bought a wicket with the introduction of Kane Williamson whose gentle spin removed Dilshan for 44 to snap a 102-run stand with Sangakkara.

Four balls later he had the chance to dismiss Sangakkara on 53 only for Mitchell McClenaghan to spill a straightforward catch at short fine leg.

Sangakkara added a further 23 before falling at the start of Milne's second spell with a mistimed cover drive that ended up in the hands of Martin Guptill at silly mid-off.

Milne followed with the first-ball dismissal of Mathews, caught behind by Ronchi which left Sri Lanka 180 for four with 17 overs remaining.

When Jayawardene, who smacked nine fours and three sixes in his 82-ball innings, was dismissed by Corey Anderson, Sri Lanka had reached 245 for 5 but the tail were unable to keep up the momentum.