Jayalalithaa's Body Buried In Sandalwood Casket Next To MGR In Chennai 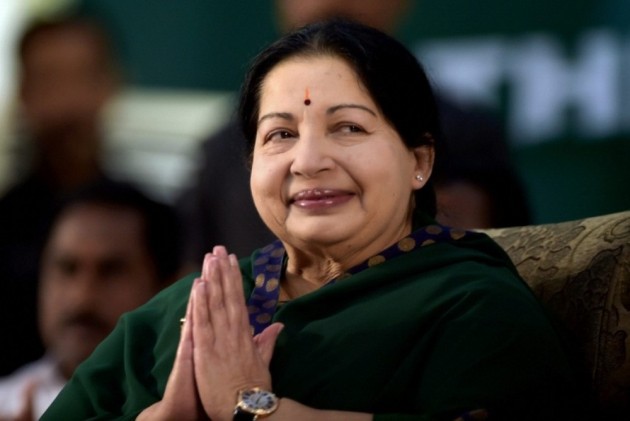 Print
A
A
A
increase text size
Outlook December 06, 2016 00:43 IST Jayalalithaa's Body Buried In Sandalwood Casket Next To MGR In Chennai

As the sun prepared to sink below the horizon, J Jayalalithaa was lowered into the ground in a sandalwood casket next to the memorial of her mentor MG Ramachandran on the Marina beachon Tuesday.

The sound of guns booming at the crimson sky  and the emotional chants of 'Amma Vazhga' (Long Live Amma) by the thousands of people who had converged there vibrated the evening air  as Jayalalithaa's long-time confidante Sasikala Natarajan and AIADMK supremo's nephew  showered flower petals and sandalwood pieces.

Her body was covered with an AIADMK party flag red and white in colour with an image of Dravidian ideologue and former Chief Minister C N Annadurai. Nails were then hammered in on the coffin that was engraved with the words 'Puratchi Thalaivi Selvi' (Revolutionary Leader) in Tamil, before being lowered.

The body of Jayalalithaa, draped in her favourite green colour saree, was taken from her Poes Garden residence early this morning to Rajaji Hall where tens of thousands of people queued up to have a last glimpse of their 'Amma’ who died on Monday night following cardiac arrest, 75 days after she was rolled into Apollo hospital in Chennai, the capital of Tamil Nadu.

For the final journey, the casket, which was placed at Rajaji Hall, was shifted to a flower-decked gun carriage doubling up as the funeral cortege to be taken to the burial site.

Emotional men and women thronged terraces of high-rise buildings and on either side of the road for a last glimpse of the departed leader, who was being taken in a long cavalcade of several vehicles besides the gun-carriage.

As the casket carrying the body of six-time chief minister was placed on the steps of Rajaji Hall, in the heart of the city off arterial Anna Salai, four Army men covered it with the Tricolour. Jayalithaa's long time confidante Sasikala Natarajan stood close to the casket.

After Jayalalithaa's body was brought to the Rajaji Hall, the crowd could be seen swelling by the minute and the heavy posse of police personnel deployed there were finding it very difficult to control them. Several women were wailing and beating their chests.

All roads leading to Rajaji Hall grounds were bustling with crowds of people who did not mind taking a long walk with public transport, barring trains, remaining off the roads.

Prime Minister Narendra Modi was among scores of political leaders who headed to Chennai to pay tributes to the 68-year-old AIADMK chief.

National flag on all government buildings across the country was flown at half-mast.