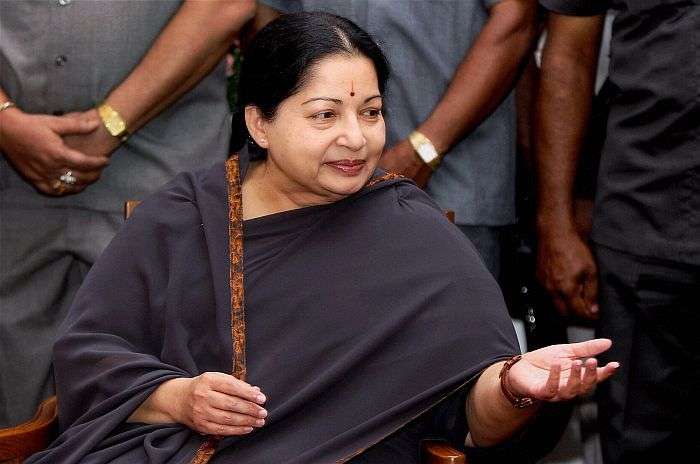 A 67 kg cake, special poojas and a slew of welfare activities marked the 67th birthday of AIADMK supremo J Jayalalithaa, who was greeted by Prime Minister Narendra Modi.

"Birthday greetings to Jayalalithaa ji. May she be blessed with a long life, filled with good health," Modi tweeted.

Rosaiah sent a flower bouquet and in his message hailed her 'leadership skills' and 'commitment for people', an AIADMK release here said.

"He wished her all success in her service to the people and wished good health and happiness," it added.

Jayalalithaa, who is out on bail after being sentenced to four year in jail in a graft case by a Bengaluru special court, had a quite day.

The party headquarters at Royapettah here wore a festive look with Cabinet Ministers including Chief Minister O Panneerselvam and other supporters thronging it.

A 67 kg cake, denoting the age of the 'Puratchi Thalaivi', revolutionary leader as she is addressed by partymen, was cut at the party headquarters by Social Welfare Minister P Valarmathi and sweets were distributed.

A souvenir was also released on the occasion.

A state government release said that drought-resistant varieties will be planted and the initiative will be completed by December this year.

It was a practice of Jayalalithaa to launch such a sapling plantation drive as Chief Minister, with programmes scheduled just a few days ahead of her birthday. She herself had initiated programmes to plant 64 lakh, 65 lakh and 66 lakh saplings in 2012, 2013 and 2014, respectively.

The Rs 52.72 crore effort was being continued as it was "well received" by people, the release said adding 2,09,375 saplings will be planted in each of the 32 districts in the state.

Special prayers at religious places were conducted for the former Chief Minister's acquittal in the asset case, while mass marriages and welfare activities marked the day for her supporters.

Convicted in the Rs 66.66 crore disproportionate assets case by the Bengaluru court in September last year, Jayalalithaa has challenged the verdict in the Karnataka High Court.

While Ministers were at the forefront of organising special prayers including pulling temple cars praying for the well-being of their "Amma" (mother), a Jayalalithaa loyalist and martial arts expert Shihan Hussaini had "crucified" himself for six minutes and seven seconds yesterday as part of celebrating her birthday.

Later several industrialists and cinema stars besides others greeted Jayalalithaa.

A madurai report said AIADMK party workers celebrated Jayalalithaa's birthday at various places in the district, invoking the blessings of the Gods to give her long life, for victory in the ongoing case against her and for her to once again become Chief Minister

Hundreds of women took out processions, carrying pots containing milk for offer to the deities

State minister R B Udhayakumar led more than 1,000 party workers by foot to the irukkankudi Mariamman temple praying for the good health of their leader.

Free food was organised at several places, dhotis and sarees were distributed free of cost to the poor. Babies born today at the Government rajaji hospital here were given a small gold ring.