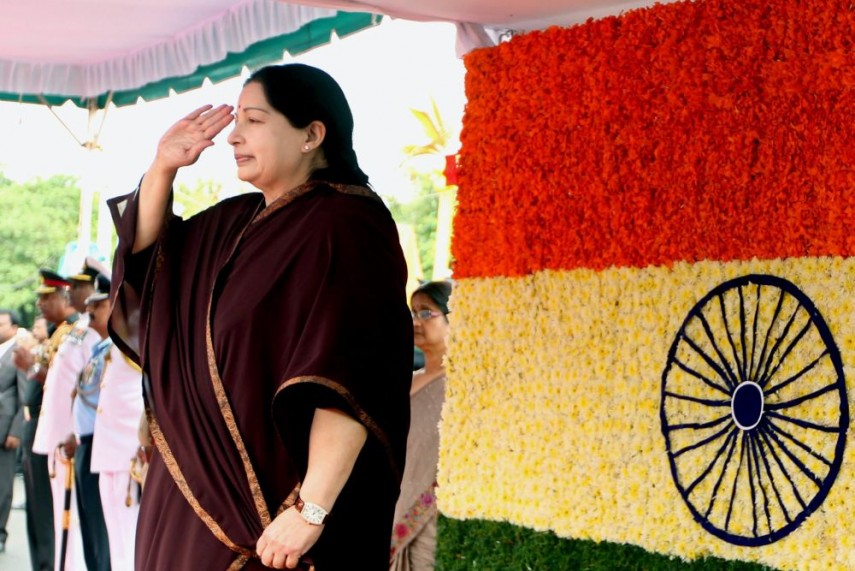 Jayalalithaa, tinsel town heroine who practised politics on her own terms to remain one of the main poles of Tamil Nadu politics for three decades, was a feisty leader with a lot of grit and determination staging remarkable comebacks despite setbacks on account of corruption cases.

A teen starlet, who acted with the who's who of Tamil cinema in the sixties and seventies, Jayalalitha went on to become a five-time chief minister of Tamil Nadu, effortlessly inheriting the mantle of her mentor and superstar MGR.

Practitioner of adulatory politics, she has often been criticised for the public display of unswerving loyalty of her senior leaders and cadre, but nothing deterred her from what she sought to achieve in her own way.

Born in a Brahmin family in Mysore in Karnataka, Jayalalitha quite often had the better of her arch-rival M Karunanidhi, a stalwart and one of the earliest products of the Dravidian movement that was founded on an anti-Brahmin platform.

After her formal initiation into the politics in 1982 when she was inducted into the AIADMK, she displayed enormous political skills in shouldering the task of running the party after the death of M G Ramachandran in 1987.

68-year-old Jayalalithaa had to quit twice over corruption cases, but managed to stage dramatic comebacks on both occasions.

While the journey of actor Jayalalithaa started in 1965 in 'Vennira Aadai,' (The White Dress), she assumed her political avatar in 1982 after MGR made her the Propaganda Secretary the next year.

The charismatic actor-politician was made a Rajya Sabha member in 1984 by Ramachandran, with whom she had paired opposite in 28 films, and led the party's charge in the 1984 Assembly and Lok Sabha polls when he could could not go on a campaign trail following illness.

But her moment of reckoning came a few years later when Ramachandran died in 1987, with AIADMK at crossroads.

The leader was humiliated as MGR's body was lying in state in the heritage Rajaji Hall when a DMK leader tried to push her from the rostrum.

She faced intense and protracted struggle to eventually head the AIADMK overcoming the animosity of rival camps led by the leaders like senior minister in the MGR cabinet R M Veerappan.

AIADMK split into two factions then, famously called AIADMK (J) and AIADMK (Ja) after Jayalalithaa and Janaki, wife of Ramachandran.

Jayalalithaa successfully contested the Tamil Nadu Assembly election in 1989 from Bodinayakkanur and became the first woman Leader of Opposition in the House.

This period saw some challenges in her political and personal life, with Jayalalithaa alleging she was harassed and attacked by ruling DMK in the House even as she met with a deadly accident.

She unified AIADMK in 1990 which had split following the death of Ramachandran and led her party to a superb victory in 1991 with a massive majority.

However, the five-year period turned out to be her undoing as corruption charges, display of pomp during her foster son's marriage and non-performance led to her defeat in the 1996 elections at the hands of arch rival DMK.

Soon after, a slew of cases including the disproportionate assets case were filed against her.

For nearly six months, starting September 2001 she was out of office after she was unseated by Supreme Court vis-a-vis electoral disqualification in the TANSI case.

Between September 29, 2014, and May 22, 2015, she was out of office again after she was disqualified as a legislator and consequently lost chief ministership following her conviction in a graft case by a trial court in Bengaluru which was later set aside by Karnataka High Court.

Twice she went to jail, once after the DMK government registered a corruption case in 1996 and the second time after her conviction in 2014.

But Jayalalitha took legal recourse to stage terrific comebacks on both the occasions.

Hailed as 'Puratchi Thalaivi' (Revolutionary Leader), Jayalalithaa proved wrong all calculations of DMK retaining power in 2011 when she led her party to a fantastic victory by forming a rainbow coalition comprising DMDK and Left parties.

She retained power in 2016, scripting history after three decades to ensure that a party won a successive term.

Jayalalithaa is credited with introducing innovative schemes and projects, including 69 per cent reservation in education and employment, freebies and a host of brand Amma initiatives like water, cement and subsidised canteens.

Jayalalithaa's only trusted aide for long was Sasikala Natarajan who stayed with her at her Poes Garden. Sasikala was briefly expelled from the party for a couple of times but the two reconciled quickly on those occasions.