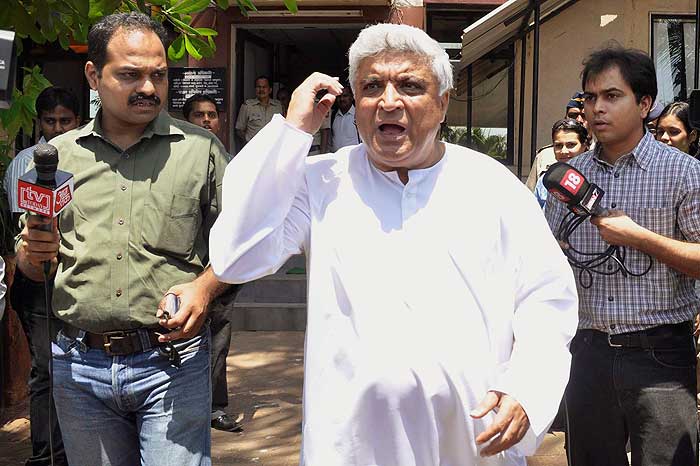 Veteran lyricist-writer Javed Akhtar today lashed out at Pakistani artistes, saying the fact they have not condemned the Uri attack is a kind of a "confession" that the country is responsible for it.

Akhtar, 71, said he does not see any reason behind Pakistani artistes' silence on the attack.

Earlier in the day, actress-MP Hema Malini sought to steer clear of the controversy surrounding the demand for a ban on Pakistani actors working in Bollywood, saying she respects the artistes but cannot ignore the sacrifice of Indian soldiers.

"As an artist I appreciate their work but I don't want to comment about whether they should live here or leave this country," she said at an event in Delhi.

Noted lyricist Gulzar also avoided a direct answer on the strained ties between the two nations.

"Is this relevant to the programme for which we have come? Aap agar shaadi may jaayein, aur baat frontier ki karne lage, theek lagega? We should talk of Motu Patlu to the soldiers there? Be relevant to the occasion," 82-year-old Gulzar told reporters.

Actress Radika Apte was forthcoming in her opinion on the demand for ban on Pakistani artistes.

When asked about the issue at the launch of watch brand 'Swatch', she told reporters, "I think if a Swiss watch can come to the country and have their own corporate stores, I think a Pakistani actor should come here and do a film here in India. That's my statement."