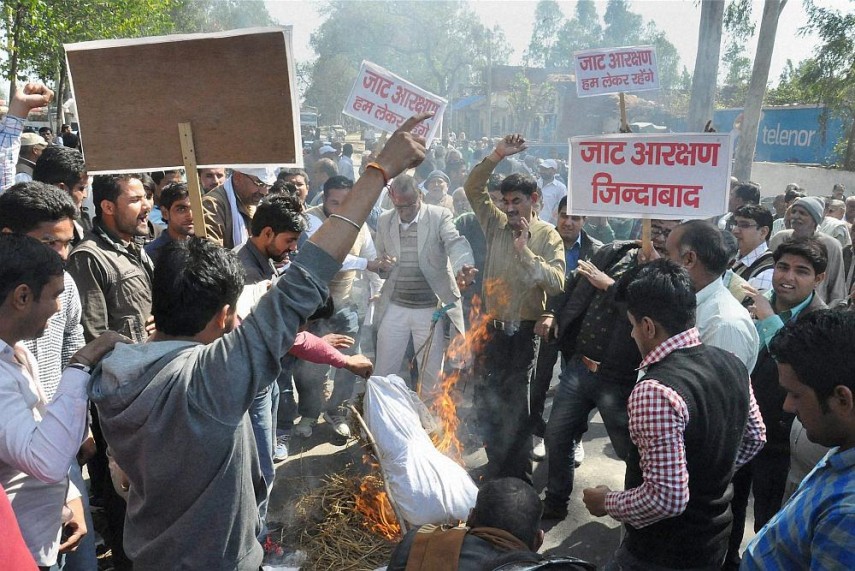 A Bill to provide reservation to Jats and five other communities in government jobs and educational institutions was today unanimously passed by the Haryana Assembly, ahead of the April 3 deadline set by the community which launched a violent quota agitation last month.

Meeting a key demand of the community, the Bill envisages reservation to Jats and five other castes--Jat Sikhs, Rors, Bishnois, Tyagis and Mulla Jat/Muslim Jat--by constituting a new classification Block 'C' in the Backward Classes category.

The Bill proposes to give 10 per cent reservation to Jats and five other castes in government and government aided educational institutions and Class III and IV government jobs.

It also envisaged 6 per cent reservation to Jats and five other castes in BC 'C' category in class I and II jobs.

Jats had threatened to relaunch their agitation on March 18 but put it off till April 3 after the BJP government assured them it would bring the Bill in the ongoing Budget session.

They had last month launched a stir demanding reservation in BC category. The agitation, which had taken a violent turn, left 30 people dead and 320 persons injured and resulted in huge damage to property.

Congress members did not attend the session today as they were demanding revoking the suspension of their three MLAs.

Though Jat and Khap leaders led by All India Jat Aarakshan Sangarsh Samiti, which spearheaded the campaign for quota, hailed the reservation given to them, Samiti Chief Yashpal Malik raised objection to giving 11 per cent reservation in BC 'A' category in comparison to 6 per cent reservation to Jats and other castes in BC 'C' category for Class I and II jobs.

Chief Minister Manohar Lal Khattar said the state Government has fulfilled its promise of giving reservation to Jats and members of other castes, saying it's a "win win" situation for all and no one stands to lose.

"No section stands to lose, it is a win-win thing for all. A long pending issue has been solved, we have kept our promise. The Bill was passed unanimously in the Assembly," Khattar told a press conference after the Bill was unanimously passed by a voice vote.

Haryana government will request the central government to include this Act in 9th Schedule read with Article 31B of the Constitution.

Congress leader and former Chief Minister Bhupinder Singh Hooda slammed the BJP Government while describing the Bill as "carbon copy" of what the Congress had provided during its regime.