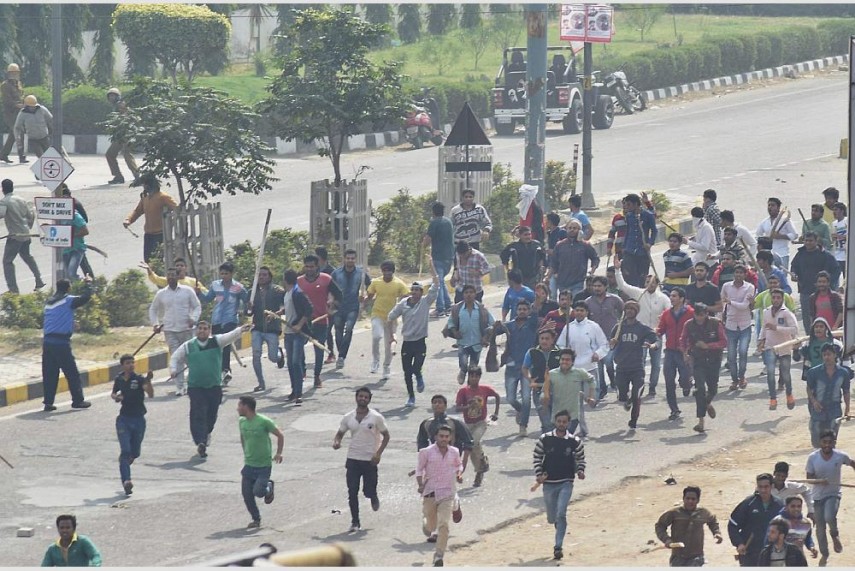 Former Chief Minister Bhupinder Singh Hooda's close aide Virender was today charged with sedition by Haryana police for allegedly inciting violence during the Jat quota stir that killed 28 people in Haryana which was limping back to normalcy.

The death toll in the violence that put Haryana on the edge and left a trail of destruction was put at 28 by State DGP Yashpal Singhal. Over 200 persons including few security personnel were also injured during the nine-day-old agitation.

Singhal said the sedition charges were in connection with an audio clip of Virender's conversation in which he allegedly incited violence.

An FIR has been registered in Rohtak against Virender and Man Singh Dalal, who also allegedly figured in the taped conversation, under various sections of the IPC, including section 124-A (sedition) and section 120-B (conspiracy), Singhal told the media here.

They have also been charged with IPC sections 153-A (promoting enmity between classes) and section 153-B (imputation, assertion prejudicial to national integration), he said.

The FIR against the duo has been registered on a complaint of a Bhiwani resident Pankaj Kumar, he said.

Virender had earlier accepted that the voice in the clip was his but alleged that it had been "doctored".

He has maintained that nowhere had he talked about instigating Jats or anyone. "Moreover, the conversation is an old one, much before the current unrest started," he had said.

"Twenty eight people have been killed during the stir. We have arrested 127 persons and registered FIR against 535 others. Over 200 persons including few security personnel were also injured during the agitation," Singhal said.

Curfew was lifted in Hisar district and relaxed in violence-hit Rohtak and Bhiwani districts while rail and road traffic were gradually resumed on routes which had remained blocked during the agitation.

In Bhiwani, one of the worst-affected districts in the agitation, authorities gave a four-hour relaxation in curfew as the situation was improving, officials said.

Curfew was lifted from Hisar and its nearby town Hansi, though prohibitory orders under Section 144 banning assembly of five or more persons will remain in force.

Day-long relaxation in curfew was allowed in Rohtak, the epicentre of the pro quota agitation in Haryana.

"The situation is peaceful in Rohtak city today. No untoward incident has been reported from anywhere," a senior police official said.

Life was also returning to normal in violence-hit Sonipat, where three persons had died in a clash with security forces two days back.

Meanwhile, the Haryana government appointed retired IPS officer Prakash Singh "to inquire into the acts of omission and commission on part of all officers and officials of both police and civil administration during the Jat reservation agitation (which) resulted in blockades of roads including national highways, violence and extensive damage to public and private properties in many districts", an official spokesman said.

As the situation in the state improved, the government opened all institutes under the control of Directorate, Industrial Training with effect from today.

Also, the Khattar government announced those who suffered property loss during the stir could claim up to 25 per cent as interim relief immediately on the basis of self-assessment of damage, an official spokesman said.