Jat Agitation: CM Khattar Invites Leaders For Talks Ahead Of Their Plans To Gherao Parliament 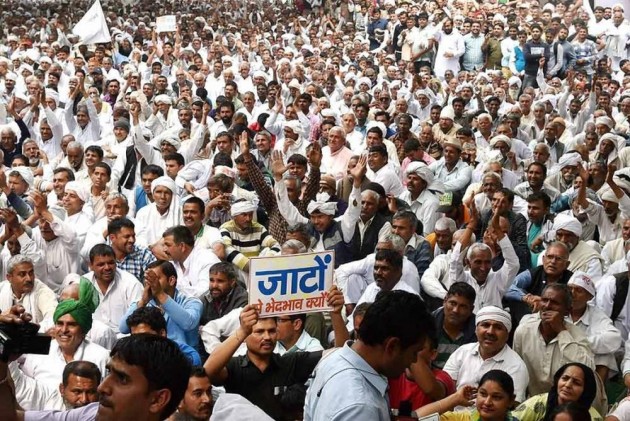 Print
A
A
A
increase text size
Outlook March 19, 2017 12:52 IST Jat Agitation: CM Khattar Invites Leaders For Talks Ahead Of Their Plans To Gherao Parliament

The talks come ahead of the Jat community's plans to gherao Parliament in support of their demands.

As a precautionary measure, Army has been called out. Prohibitory orders under Section 144 of CrPC have been imposed and Internet services suspended in many 'sensitive' districts of Haryana including in Rohtak, Jhajjar and Sonepat.

Speaking to reporters, the chief minister said, "We are committed to resolve the issue".

Khattar along with Union Minister of State for Law and Justice P P Chaudhary and Union Minister Birender Singh would be holding the talks with Jat community leaders.

"Government is serious about resolving the issue. To maintain peace and brotherhood in the state is our first priority," Khattar said.

The state's DGP, K P Singh said that all highways and other roads passing through the State are open and all security measures have been taken, so that people, especially students who are appearing in the CBSE board examinations may travel through the state without any fear.

The All-India Jat Aarkashan Sangarsh Samiti, the body spearheading the ongoing quota stir which entered its 50th day today, has remained firm on its plans to lay siege to the national capital tomorrow.

AIJASS President Yashpal Malik had yesterday said that the Centre should intervene to resolve the issue.

Malik had claimed that the present State Government "looks confused and is not showing sincerity in resolving the issue".

A Haryana ministerial panel led by senior Minister Ram Bilas Sharma had held talks with the Jats in Panipat on March 16, after which the Minister had said that an agreement had been reached with the Jat community and the deadlock could end soon.

Emerging out of the marathon talks held in Panipat, Malik had announced that they would be having a meeting with the Chief Minister in Delhi on March 17 but Khattar had later said that the Jat leader had made the announcement unilaterally.

Khattar today said, "Whatever confusion arose earlier, will be removed. Whatever has been decided at the March 16 meeting, we will look to move forward from there".

Notably, after the meeting in Panipat on March 16, both Sharma and Malik had maintained that the talks were positive.

Malik had earlier insisted that for any talks to fructify, Khattar's presence in the meeting was a must. (MORE) Khattar has cancelled most of his scheduled engagements

today to meet the Jat leaders.

"Most of Chief Minister's scheduled engagements have been cancelled. If the CM gets some time in the evening, he may visit the Agri Leadership Summit at Surajkund in Faridabad," Khattar's media advisor, Amit Arya said.

Earlier this week, Khattar had formed a three-member panel and invited the community leaders for a fresh round of talks at Panipat.

Haryana is on alert in view of the Jat body's plan to march to Delhi tomorrow and gherao Parliament.

Paramilitary forces have been deployed in strength in various sensitive districts of the State as Jats have given a "Delhi kooch (march)" call for tomorrow.

Prohibitory orders under Section 144 had been imposed as a precautionary measure, prohibiting sale of liquor, carrying of firearms and other weapons, assembly of five or more persons near railway tracks and plying of tractor-trolleys carrying five or more persons on state and national highways, an official spokesman said here.

The spokesman said a limit of 10 litres has been imposed on refuelling of tractor-trolleys, and directions have been issued to petrol pump owners to record details such as driver’s name, registration number of the vehicle and number of people travelling in the vehicle.

A ban has also been imposed on sale of petrol and diesel in bottles or other containers.

He said a ban has also been imposed on plying of tractor-trolleys carrying food items, cooking equipment and materials and any type of weapon including lathis and swords on state and national highways.

He said that pitching of tents along state and national highways has also been prohibited and owners of dharamshalas, hotels and restaurants have been directed to maintain complete record of guests who stay at their premises.

Besides seeking quota, the demands of the Jats include release of those jailed during last year's agitation, withdrawal of cases slapped during the protest and government jobs for the kin of those killed and injured while taking part in the stir.

The Jats have been sitting on a dharna in various parts of Haryana since January 29.