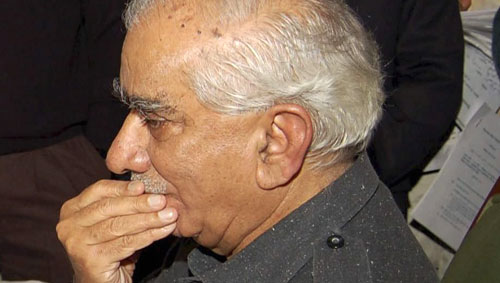 "This cannot be a decision that the party can take because the determination of the post and the decision is that of the Lok Sabha Speaker," Jaswant said.
File Photo

outlookindia.com
-0001-11-30T00:00:00+0553
Expelled leader Jaswant Singh today rejected BJP demand to step down as chairman of the parliamentary Public Accounts Committee (PAC) as demanded by the party, saying a decision on this can be taken only by the Lok Sabha Speaker and not by it.

"I am not. This cannot be a decision that the party can take because the determination of the post and the decision is that of the Lok Sabha Speaker and not of a political party," Jaswant told reporters in the Supreme Court premises on being asked about BJP asking him to resign from the post.

Jaswant also scotched speculation about his return to BJP. "You don't have to worry about it. The roads are closed," he said when asked about the possibility of his getting back to the party.

His remarks comes a day after senior BJP leader Sushma Swaraj conveyed to him the party's wish that he step down as PAC chairman.

Jaswant, being the senior-most of the three BJP MPs nominated to the PAC from the party, was appointed the chairperson of the committee. The other two BJP members are Yashwant Sinha and Gopinath Munde.

As per convention, the chairpersonship of the PAC was given to BJP as it is the main opposition party.

Asked about the ban on his controversial book on Mohammad Ali Jinnah in Gujarat, Jaswant said L K Advani and the party president Rajnath Singh should have discussed the book with him before taking a decision to expel him.

Brushing aside allegations of plagiarism, he said some mistakes have been pointed out which will be rectified in the book's next edition. He said, "I am grateful to the author C.M. Naim. He has not said that the book is plagiarised. Those are mistakes relating to the end notes. I will rectify it in the next edition.”

He repeated that the Gujarat government had banned the book without reading it. “Nobody, neither Advaniji nor the BJP President [Rajnath Singh] has read the book. I would have liked if the senior leaders of party discussed the book. It is not possible that the book could be read between its launch and the day it was banned.”

He said “it is an attempt to stifle and suppress my voice which amounts to suppression of thoughts and curbing the freedom of expression.”

The apex court today issued notice to the Narendra Modi government on a petition filed by Singh challenging the ban order.

Gujarat government had banned the book on August 19, two days after its launch, on the charge that its contents were against public tranquility and national interest.

Jaswant was expelled from the party on August 19 during the BJP Chintan Baithak in Shimla for his remarks in his book Jinnah -- India, Partition, Independence.