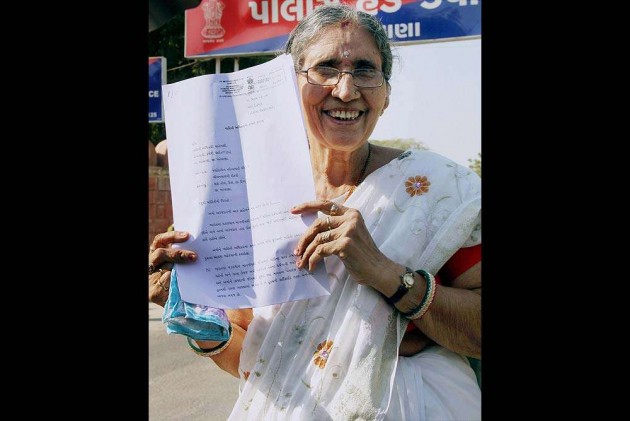 Prime Minister Narendra Modi's wife Jashodaben has filed an appeal under RTI act after she was denied information by Mehsana District police saying that all queries about the protection given to her were related to local intelligence bureau, which is exempted under RTI Act.

"I am the wife of Prime Minister of India.... I have asked for the order's copy (regarding the protection given to her), which are not related with LIB (local intelligence bureau). So I demand to get the copy of those orders in this appeal," Jashodaben Modi said in the appeal to Mehsana district Superintendent of Police (SP) on December 30.

"There is no specific reason given to me in the reply (by Mehsana DySP) for denying the information. I am Prime Minister's wife, therefore the information under RTI was not given to me with someone's intervention," Jashodaben said in the appeal.

Jashodaben has also demanded the copy of the state home department's order under which LIB was given exemption under RTI Act according to Mehsana police.

"The information sought by you (Jashodaben Modi) was related with the LIB and as per the Gujarat Home Department's resolution number SB.1/1020018203/GOI/62 of dated November 25, LIB has been exempted from RTI Act and therefore the asked information cannot be given to you," reads the letter written by the public information officer and Deputy Superintendent of Police in Mehsana Bhakti Thakar to Jashodaben.

In her RTI application filed before Mehsana Police on November 24, she had sought several documents related to the security cover given to her as per protocol, including the certified copy of actual order passed by government about providing security.

She also wanted to know the laws and related provisions in Indian Constitution about security cover given to a PM's wife.

She had asked the government to explain the definition of protocol and sought details about what is included under it and what other benefits she is entitled to as per that protocol.

She also expressed unhappiness about the current security set-up, where her guards travel in government vehicles like car, while she, despite being a PM's wife, has to travel in public transport.

Further, Jashodaben added that as former Prime Minister Indira Gandhi was killed by her own security guards, she feels scared of the security personnel escorting her. She asked the government to make it compulsory for each guard to produce the copy of deployment order.

Jashodaben lives with her brother Ashok Modi at Unjha town of Mehsana district. After Narendra Modi was sworn-in as PM, she has been given security by Mehasana police.

Mehasana police has deployed ten policemen, including armed guards, for her security. They work in two shifts, five each in one shift.