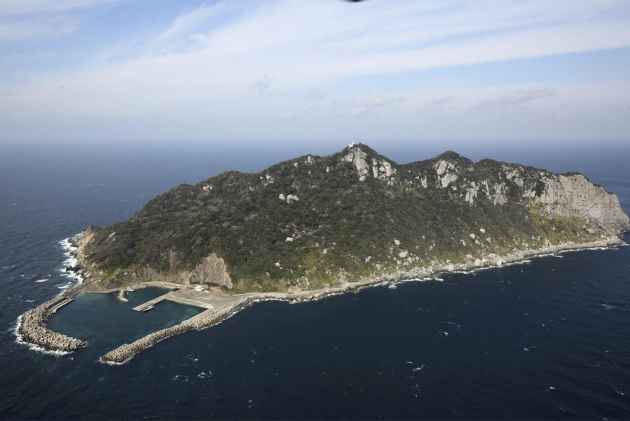 A men-only island in Japan where women are banned and male visitors must bathe naked in the sea before visiting its shrine, has been declared a UNESCO World Heritage site.

The tiny landmass of Okinoshima is permanently manned by a Shinto priest who prays to the island's goddess, in a tradition that has been kept up for centuries.

Limited numbers are permitted to land on the island in the Sea of Japan (East Sea) -- this year it was 200 -- for a yearly festival that lasts just two hours, but they must adhere to strict rules.

Most importantly, they must be men, but they must also strip off and take a purifying dip in the ocean before they are allowed to set foot on the sacred ground of the shrine.

Despite its inscription on UNESCO's World Heritage list -- often the prelude to a leap in tourist numbers -- shrine officials say they are now considering banning future travel for anyone apart from priests, partly out of fears the island could be "destroyed" by too many visitors.

"The island has sometimes been said to ban women, but in principle anyone but the priests who pray there for 365 days a year is barred from entering," said a spokesman.

The ban on female visitors specifically "has nothing to do with discrimination against women," the official told AFP by phone.

It is considered dangerous for women to travel by sea to get to the island and the shrine will not change the centuries-old rule, he said.

"It is meant to protect women, the birth-giving gender," he added.

The island, which sits off the northwest coast of Kyushu, the southernmost of Japan's four main islands, was an important window for foreign trade in Japan since ancient times, forming part of a trade route that linked the archipelago to the Korean peninsula and China.

Thousands of gold rings and other valuable items have been found there.

"These treasures are believed to have been offered to the gods in order to pray for national prosperity and the safety of marine traffic," says the website of Munakata Taisha, the shrine which owns Okinoshima.

UNESCO's heritage committee considered 33 sites for the prestigious status at its annual gathering in Poland.

On Sunday it also accepted Taputapuatea, a portion of the "Polynesian Triangle" in the South Pacific thought to be the last part of the globe settled by humans, to the list.

It also added Britain's Lake District -- muse for artists from William Wordsworth to Beatrix Potter -- and the Valongo wharf in Rio de Janeiro where slaves from Africa first arrived in Brazil.