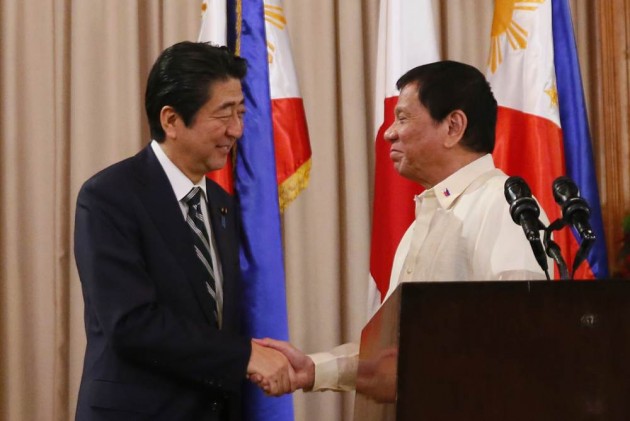 Abe is intent on maintaining Japan's strong ties with the Philippines as Duterte shakes up his nation's foreign policy with a shift away from the United States, both nations' longtime ally, in favour of China and Russia.

After his two-day stay in the Philippines, Abe will head to Australia, Indonesia and Vietnam with a business delegation as he looks to the region to boost Japan's economy dragged down by a greying and shrinking population.

"I would like to exchange views on bilateral and regional issues and hold frank talks on how we should contribute to the peace and stability of the region," Abe said before departing for Manila.

While Duterte has pivoted away from the United States, he has gone out of his way to maintain close relations with Japan -- the Philippines' largest donor and top trading partner.

"Japan has really been our biggest helper," Duterte said on a visit to Tokyo last October when he met Abe.

His warm words for Japan have been helped by Abe and his government offering no criticism of the Philippine crime war, which has claimed about 6,000 lives since Duterte assumed the presidency in the middle of last year.

Duterte has repeatedly railed against US President Barack Obama and his administration for alleging widespread human rights abuses in the crime war.

Duterte has travelled overseas extensively as president. However Abe is the first head of government to visit the Philippines since Duterte took office.

Abe and Duterte are scheduled to meet in the presidential palace today, the Philippine foreign affairs department said.

Abe will also visit Duterte's home town of Davao in the southern region of Mindanao, where Japan has supported the peace process with Muslim rebels through development and poverty eradication programmes.

Japan was the Philippines' top trading partner in 2015, with $18 billion in trade, according to official figures.

With a severely under-equipped military and coast guard, the Philippines has also looked to Japan to boost maritime security as the two nations face separate sea disputes with China.